The head of the IAASB, Tom Seidenstein, sees innovation, collaboration and agility as vital if the organisation is to address the disruption across the audit profession 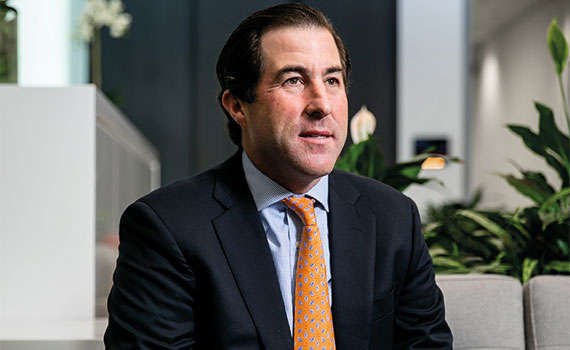 Having taken the helm of the International Auditing and Assurance Standards Board (IAASB) last July, Tom Seidenstein recognises the challenges posed by the loss of trust in audit quality and the intense scrutiny the profession is experiencing. He intends to respond by embracing innovation while maintaining a commitment to high-quality standard-setting.

‘From my experience, millennials and the next generation are attracted to fields where there’s a sense of purpose and a pursuit of truth. Standard setters should enable that,’ he says. ‘We have to write standards that are clear, understandable and implementable. We also have to be agile enough that as new issues arise, we are able to respond rapidly.’

Seidenstein’s first priority is to ensure the IAASB has a work programme with the ‘right mix of projects’. This includes completing major revisions to standards and supporting the interpretation, application and improvement of standards. Within the mix, Seidenstein also wants to address emerging issues – including those ‘contributing to the expectation gap today’, with fraud and going concern being two hot topics. There are other emerging issues, too, such as how to tackle complexity, particularly for smaller entities, and how to deal with non-financial reporting, value reporting and integrated reporting. ‘We have a project on emerging forms of external reporting, but we have been concerned not to stifle innovation in that space or point our ship towards one direction when the world may want to go elsewhere,’ Seidenstein says.

The use of technology is also attracting attention. ‘We are dealing with technology issues in an incremental fashion right now,’ he says. ‘But we need to work with a broader set of stakeholders to understand what the world of audit and assurance could look like if things take a major step forward in the use of technology, machine learning and artificial intelligence.’

In helping the IAASB address such issues, Seidenstein brings his experience at the International Financial Reporting Standards (IFRS) Foundation, which he was instrumental in establishing. ‘We saw a lot of successes in terms of global IFRS adoption, and the International Accounting Standards Board evolved as an organisation. But it was also a period where we had some fundamental challenges. There were concerns post-crisis about fair value, and about this new body and its accountability. ’

Seidenstein is also applying his experience gained at the leading provider of mortgage finance in the US, Fannie Mae, where he was in charge of strategy for seven years. ‘It became clear to me what it takes to create a crisp, clear strategy,’ he says. In Seidenstein’s view, having a clear strategy clarifies organisational goals externally and internally, ‘provides a lens’ for making choices about priorities in a world of limited capacity, and supports accountability.

Innovation is likely to play a part in the IAASB’s future strategy. ‘Can we be more agile?’ Seidenstein asks. ‘Can we use collaboration tools to engage a broader stakeholder group and get input not just in the exposure draft and formal consultation period, but throughout in an iterative fashion?’ Seidenstein wants to remove ‘barriers to entry’ that could dissuade wider stakeholders, including the general public, from commenting on issues. He also sees value in cross-sector collaboration – for example, learning from the technology or start-up community in terms of ‘how they operate and what technologies are coming on that could impact the audit profession’.

Other lessons could be learnt from the tech sector, Seidenstein believes, particularly the willingness to experiment and fail. ‘We must be willing to try new approaches to solve issues of public interest, rather than seeing long, three-year projects as the only way,’ he says. ‘You have to find sandboxes and be willing to allow people to experiment there. You have to be willing to put things out in beta format and let people test them. It’s about an agile process in the build-up to a standard – lots of user testing, lots of iteration and long-term acceptance of the willingness to fail now and then.’

Seidenstein also wants to see whether the IAASB could have ‘more tools in our tool chest’ alongside standards, such as a new improvements process or interpretations capability. He is also interested in ‘closer interaction with the official ecosystem’. For example, could the IAASB work more efficiently with the International Ethics Standards Board for Accountants or make better use of national standard setters? ‘Could the combination of securities regulators and audit inspectors, accounting standard setters and audit standard setters work more tightly together – so it’s not just about regular meetings but providing a continuous feedback loop?’ he asks.

There’s no doubting Seidenstein’s ‘commitment to the mission’ and his desire to ensure that the audit and assurance profession is a valued one. He was also attracted to the role because it allows him to engage ‘in a global policy environment’. Seidenstein has undergraduate and post-graduate degrees in public policy and having ‘a career with meaning’ is important. ‘The role of public service has always been the driver of personal ambition for me,’ he says. ‘To me, public policy challenges are interesting both because of the potential impact but also the complexity: the problems associated with public policy issues are multifaceted and require you to navigate lots of different challenges along the way.’

Seidenstein became highly involved in the accounting and auditing sphere because of a ‘sliding-doors moment’: his decision to take a course on the economics of baseball, taught by Paul Volcker, with whom he became good friends. ‘It was through that relationship that I got involved with standard setting,’ Seidenstein says. When Volcker, who died in December 2019, was appointed chair of what became the IFRS Foundation, he asked Seidenstein to help set it up. The organisation changed hugely between 2001 and 2012 when Seidenstein was director of operations and then chief operating officer. ‘When I started we had a staff of about 13 and a budget of £2.5m, and by the end the IFRS Foundation had a staff of 145 and a budget of £22m,’ he says.

Now Seidenstein’s attention is firmly focused on the audit sphere. Appointed for a three-year term, he has a clear vision of what success will look like at the end of this period: ‘That our board is viewed as responsive in tackling issues of major public interest; that we have made the standard-setting process a little more approachable for a wider group of stakeholders; and that people view the product we put out as appropriately complex – or sufficiently non-complex – for the users of those standards.’

Seidenstein is aiming high: ‘We should shoot for a profession of which everyone is proud,’ he says. ‘We should be absolutely clear that we are going to make people proud by being 100% committed to quality and the public interest. If you are a newly qualified auditor or an auditor with 10 years’ experience or at the end of your career, you should be proud of what you are doing. That’s the sign of whether we have been successful.’

"We have to be agile enough that as new issues arise, we are able to take them onto our agenda quickly and respond rapidly"

132
Jurisdictions using Clarified ISAs or committed to doing so

5
New and revised ISAs issued between 1 January 2016 and 30 June 2019, alongside six exposure drafts and five consultation and discussion papers