Wilson Koh, group treasurer at technology startup Grab, sees the challenges of the digital world as opportunities in which to create value and build personal growth 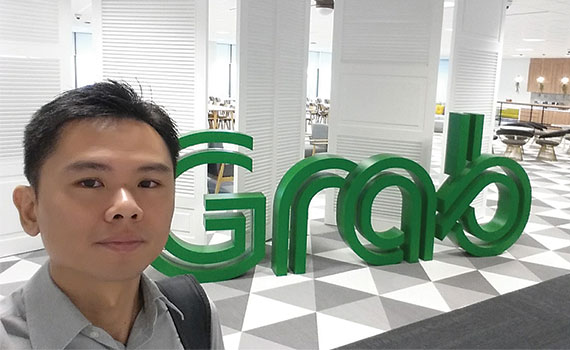 Since qualifying as a professional accountant in 1996, Wilson Koh, group treasurer at Grab, has been dedicated to continually honing and crafting his skills to become a better version of himself.

He likens his early beginnings to a piece of clay in its unshaped form – ‘without much practical use or economic value’. Since then, however, he’s gone on to pick up many valuable experiences, all of which have helped to shape him into a high-value professional and equipped him with the skills needed to lead Grab’s treasury function.

Even though Koh had more than a decade of treasury experience prior to taking on his current role at Grab – a ride-hailing transport services, food delivery and payment solutions company – in 2017, it was nevertheless a challenge. From the relatively structured and stable environment of BP, he found himself in a startup that was barely five years old.

Apart from having to build up a treasury team from scratch, Koh also found the pace to be a lot faster. Koh elaborates: ‘Someone once said that working a month at Grab is like working five months in another company. In a way, there’s some truth to that. The number of things that you do and the number of decisions that you have to make at a startup are a lot more than at a typical corporate company.’

Fortunately, Koh’s passion for treasury work would prepare him well to deal with these challenges. His entry into the specialism came about by chance. Back in 2005, while working at BP in Malaysia, he was given the opportunity to further his career, either in a finance role in London or through treasury work in Hong Kong, and opted for the latter.

‘Even though I didn’t have much experience in capital markets or raising bonds, I decided to try it anyway. It was a refreshing change because the role allowed me to learn more about how external financial markets work,’ he says. ‘Instead of looking at past financial data, our job was to ensure cash flowed throughout the company efficiently and to mitigate against financial risks by studying the markets and formulating plans.’

However, what really cemented Koh’s appreciation for the treasury function was dealing with the financial implications of BP’s Deepwater Horizon oil spill crisis in 2010. During the cleanup operation, many of BP’s trading partners grew concerned that the oil giant could go bankrupt and demanded collateral.

‘I found the experience very enlightening because I realised that even as a multinational company, if you run out of cash and are not able to meet payments, you can go bankrupt at any time,’ Koh says. ‘It doesn’t really matter how many assets you have across the world. That reinforced my thinking about the importance of managing cashflow well.’

Heart of the organisation

Koh, who is an exco member of the Association of Corporate Treasurers (Singapore), continues to be an advocate for the treasury function, which he describes as the heart of an organisation. ‘Just as the heart pumps our blood to the rest of the body, we pump out liquidity across every part of the organisation,’ he says. Indeed, this is something that excites Koh about going to work every day, knowing that what his team does directly impacts the financial wellbeing of the organisation.

Today, in the midst of the current Covid-19 outbreak, the central role of treasury has never been more important. ‘You can hear every company talking about conserving cash and governments ensuring there’s enough liquidity in the hands of the people,’ he says. ‘Suddenly, the role of treasury has been thrown into the limelight.’

While Koh acknowledges that he may no longer be the rookie he was two decades ago, he nevertheless feels that there is still much for him to learn and experience. For instance, at Grab, which is headquartered in Singapore and has its key markets in South-East Asia, Koh has found himself having to deal with a diverse group of countries with very different economic realities.

‘It’s not like the EU where there are standard rules to operate within,’ he says. ‘In South-East Asia, you have very different central bank frameworks and very different rules, which makes the job of managing cash across different markets while conforming to local regulations very challenging.’

Nevertheless, Koh welcomes these challenges and sees them as opportunities for his team to shine as they create value. ‘If it was all smooth sailing – a press of a button and money will arrive in the Philippines or Vietnam in the next three minutes – then there would be no need for our team to be around,’ he says.

To overcome these challenges, Koh says that he and his team are required to anticipate changes and prepare for them in advance. ‘It’s very much a risk-management role,’ he explains. ‘We need to know our operating environment well, communicate closely with local banks and regulators, and be aware of how to deal with the different nuances of each market.’

Rise to the challenge

Koh puts his ability to maintain a positive attitude even in difficult circumstances down to his innate love of a good challenge. Even looking back at his decision to pursue accountancy, Koh reveals that one of the deciding factors for him in choosing ACCA was its reputation for being hard to pass.

‘Knowing that ACCA was a challenging course with a less than 50% pass rate spurred me on,’ Koh recalls. And as if that challenge wasn’t enough, Koh decided that he would complete the course within the shortest possible time. ‘There was a bit of pride involved,’ he admits. ‘If I was able to conquer ACCA in two years, which meant passing everything on the first try, it would make for quite a nice story.’

Additionally, Koh shares that the other reason why he decided to pursue accountancy was due to his interest in understanding how businesses work. Flipping through his parents’ annual company reports as a child, Koh realised early on that whether it was the retail, oil and gas or healthcare industry, everyone was required to present financials ‘and the ones who could read the financial reports well were the accountants’.

Koh is grateful that, besides equipping him with the skills required of a financial professional, ACCA continues to play a vital role as a professional body. ‘I think that ACCA’s tagline “Think Ahead” really encapsulates just how the organisation is committed to supporting its members and the profession with relevant resources to move forward,’ he says. ‘ACCA’s reports and surveys on topics such as sustainability are useful not just to members but employers as well.’

Recognising the role that each of his life experiences has contributed to shaping him, Koh is passionate about giving back and having a positive impact on the people around him. He shares that his major inspiration is the late Clayton Christensen, management guru and professor on the Harvard Executive Leadership Programme, who spoke about measuring success in life not by individual prominence but by the impact made on others.

‘It really struck me that this guy, who helped companies disrupt industries and who helped create billions of dollars in new businesses streams, would come out and summarise his life into this simple metric: how to help people become better people along the way. This has since become my north star – to help uplift the profession, and to serve and help wherever I can.’

One of the ways Koh gives back is as an ACCA Network Panel member, reaching out to the association’s community to become more involved.

‘We have more than 7,000 ACCA members in Singapore but the number of active ones is fewer than 300,’ Koh says. ‘I see this as a great opportunity to reach out to those out there who have plenty of contributions to make.’

Koh is also the chairman of ACCA Singapore’s GenNext group, which focuses on members who are starting out in their career and who need help in networking, coaching and mentoring.

He is an advocate of finance teams fully embracing digital tools, too. Drawing on his experience at Grab, he shares how important data is to the company, from knowing more about changing consumer behaviour and giving valuable insights to food merchant partners to running marketing promotions. ‘For the finance function, making sense of this data and presenting it to the CFO or the board in an intelligent and strategic manner so that key decisions can be made is crucial, he says.

‘The future will really belong to those who know how to harness digital tools and data. It links back to what ACCA refers to as the data navigator and the digital playmaker. Whichever companies we are in, it is important to pick up these tools.’

"My north star is to help uplift the profession, and to serve and help wherever I can"

Headquartered in Singapore, Grab is South-East Asia’s largest technology company and the region’s first decacorn: a startup valued at over US$10bn. Through its open-platform strategy, Grab works with partners to provide safe, accessible and affordable transport, food, package, grocery delivery, mobile payments and financial services. More than nine million micro-entrepreneurs have earned income using the platform, which in 2019/20 contributed US$8.5bn to the region’s economy.

‘Constantly evaluate yourself. At the end of every year, get a mentor or a friend to help you look back at how you’ve grown. If you find that you can’t convince them or yourself about what you’ve learnt, then it’s a good sign that you probably need to move on.’

‘Don’t stay stagnant. Our professional life has an expiry date as well. We have to either learn or renew or refresh ourselves; otherwise, someone may disrupt you and you may be left out in the open without the necessary skills or experience to continue.’

‘Gain a wide range of experiences. If you have the chance, do a bit of everything; find out what allows you to make an impact. Doing the same thing day in and day out is dangerous, both personally and professionally.’

‘Join a startup. I see great value in roughing it out at a startup, where things are never structured. You have to do everything; that’s where your impact is the biggest, and where your learning curve is the steepest.’