Radical changes to the US tax regime pose challenges for Ireland

The Tax Cuts and Jobs Act, the most radical change to the US tax regime for a generation, presents Ireland with a mix of challenge and opportunity 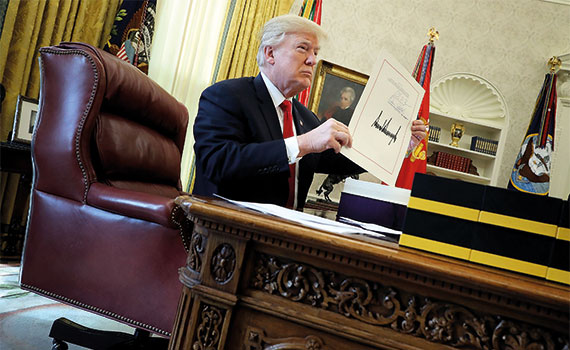 Ireland is fighting to preserve the tax advantages it offers US firms that base their European headquarters in the country, with the recent reforms creating new incentives for US firms to repatriate jobs, profits and intellectual property.

The Tax Cuts and Jobs Act, signed into law in December 2017 by President Donald Trump, exceeded the expectations of many in its significance, believes Harry Harrison, FDI tax partner, PwC Ireland, who points to its ‘many fundamental changes’ to the US tax system. This tops a reduction in the corporate income tax rate from 35% to 21% that could impact Ireland. Harrison points to ‘provisions which allow a US company to fully expense certain capital investments made in the US, and the introduction of a favourable tax deduction for US companies where they export certain goods and services’.

To pay for these cuts, other revenue-raising provisions were introduced, enabling incremental US tax on certain non-US low-taxed income of subsidiaries and on some payments made between a US entity and a related non-US entity.

‘As a company, you have to really open up the bonnet and see how you’re affected if you have multiple locations,’ Vale adds. ‘It can be very case-specific.’ Thus far, there ‘hasn’t been a massive knee-jerk reaction’, he notes, because many multinationals had undertaken contingency planning. ‘For example, if you had profits parked offshore you would have done the calculations on what would happen if they were repatriated,’ he points out.

Other accountants are taking a similar approach, relying on advice from their US partners and waiting for the measures to bite. ‘The changes are so complex, our US colleagues are currently just seeking to plot their way through it, explains John Byrne, tax partner at Crowe Horwath in Dublin. ‘The headline rate is straightforward enough, but what’s keeping people up all night is trying to understand the detail.’

Byrne and colleagues expect to be busy now that the first impact has been felt on US corporate tax filing, which was due in April. Accountants will, he believes, be busy. ‘Once the first initial filing is done, then companies start to strategise on the way ahead,’ he says. ‘The next step is companies with intellectual property registered in Ireland; they’ll be assessing the impact on them.’

Vale anticipates an increase in the onshoring of intellectual property (IP) with the new tax code but says this could benefit Ireland ‘because IP has already been moving away from tax havens to Ireland or the US, places where the companies’ substance is. People will move some of their IP to the US, but some will also move over here.’

Also, while the reform has been sold as a territorial-based tax system, the reality is more complex, according to Vale, who says that while US tax may not be paid on foreign subsidiaries, companies are being taxed ‘through anti-avoidance measures, and dividends being remitted back are being taxed.’

Vale foresees a ‘carrot-and-stick approach’, incentivising the return of valuable activities such as IP to the US. ‘The sticky bit’, says Vale, is the global intangible low-taxed income (GILTI) anti-base erosion measure, which is of interest to companies with overseas units. All this means that firms will have to look closer at the real deduction under the changes: factor in state taxes and cancelled allowable reductions, and US corporate tax effectively falls from 38% to 28%, says Vale.

Both Byrne and Vale agree that Irish firms can benefit from this, especially if they have a lot of US-based workers. And Ireland, says Harrison, will retain its attractiveness for US investors. ‘In addition to all the commercial and regulatory benefits, Ireland’s corporate tax rate of 12.5% still compares favourably with the US rate of 21%,’ says Harrison, adding that this is particularly so when state taxes of around 4% to 5% on average are taken into account.

In a statement, the American Chamber of Commerce Ireland welcomed the reforms and said that it would help Irish companies in the US. It also welcomed Ireland’s restated commitment to its 12.5% corporate tax rate and ‘Ireland’s commitment to maintaining sovereignty over its corporation tax regime’ from the European Union. Ireland’s attractions are, however, more than tax, according to the statement. ‘The most important factor for US companies is the talent they find in Ireland. In addition, Ireland offers a very business friendly environment and it provides ease of access to European and other markets.’

Vale believes that the reforms will force Ireland to look at increasing its non-tax attractions, such as education and infrastructure, as well as reviewing its personal income taxes to allow high earners to take home more pay. ‘It’s going to force companies to reassess their investment strategy, but ultimately companies come to Europe for the commercial opportunity, so they will be seeking a base there.’

"The headline rate is straightforward enough, but what’s keeping people up all night is trying to understand the detail"

The Tax Cuts and Jobs Act in figures

Signed into law by President Donald Trump on 22 December 2017, the Tax Cuts and Jobs Act will see the US corporate tax rate fall from 35% to 21% (the Organisation for Economic Co-operation and Development average is 22.5%), while also changing from a global to a territorial tax system. This means that each subsidiary will pay the tax rate of the country in which it is legally established; previously, US companies paid US tax on profits everywhere, minus a credit for tax paid in each territory. This should theoretically reduce the incentive for tax inversion, which has seen several US corporations move headquarters to Ireland. The act also encourages repatriation of profits from overseas subsidiaries by offering an 8% tax (15.5% for cash), which could see US multinationals move some US$3 trillion offshore back home, although some of this is kept in US treasury bonds, potentially impacting US government borrowing costs in the event of liquidation of such treasuries.