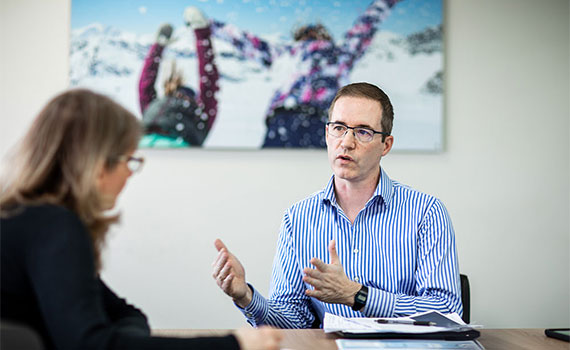 As holiday season approaches, we’re starting looking forward to our summer break. But how did you book yours? Via a high-street travel agent? Through an online provider? Consumers’ options are expanding, as John Murray, finance director at Crystal Ski Holidays and TUI Lakes & Mountains, is only too aware.

The travel sector has undergone enormous transformation in the past 10 years, and the pace of change is not letting up. ‘The traditional tour operator won’t be around for much longer unless it becomes more digitally focused,’ Murray predicts. ‘The online travel agents are becoming bigger and stronger, and then you’ve got companies like easyJet bolting on accommodation to their services.’ Even Google, he adds, is getting in on the act, launching Google Flight and other trip-planning tools.

Despite strong competition in recent years from online do-it-yourself travel platforms such as Booking.com and Airbnb, has carved out an extremely successful niche by, in many respects, doing it the old-fashioned way.

The travel group describes itself as ‘an integrated provider of holiday experiences’, which it stresses is not the same as a tour operator providing package holidays (tour operator/airline contribute to 30% of the group’s profit). The TUI Group owns 380 hotels, 17 cruise ships and crucially, its own airlines, giving the company a level of flexibility and control that tour operators can only dream of. ‘It means we can plan significantly well in advance compared to our competitors.’

It is a strategy that seems to work. TUI Group, the leading integrated travel and tourism group in the world, posted a fourth consecutive year of double-digit earnings growth in 2018, with turnover rising by 6.3% to €19.5bn, and underlying EBITDA by 10.9% to €1.18bn.

For Murray, the group’s success lies in the way it is becoming more diversified and owning the customer journey end to end. The ski business is particularly well-suited to this end-to-end model, which is why, says Murray, TUI Group held onto the business when in 2016 it divested what it saw as peripheral parts of the business. TUI sold its portfolio of specialist, luxury and adventure holiday brands (known as Travelopia), including Le Boat, Hayes & Jarvis, Citalia and Exodus, to the private equity company KKR, to focus on core products. TUI kept hold of Crystal Ski Holidays and TUI Lakes & Mountains holidays, as they are flight-led products and fit with the integrated business model. ‘The ski business has been known as Crystal Ski for 30 years and is the number one ski travel operator in the UK.’

But Murray is no stranger to change, as he has spent almost all of his career at the various iterations of the business. Most significant of these changes was the merger of Thomson (the then-owner of Crystal Ski Holidays) with First Choice Holidays in 2007. ‘I’ve worked here for 17 of the past 19 years, he says. ‘We went through a lot of changes at the point of the merger, so I thought it was a good time to try something else. I spent two years at Fujitsu. It was a great experience, working in an IT environment and Japanese culture, but when the opportunity came up to come back, I took it. Travel is close to my heart – my father worked for an airline for 30 years, so I got the travel bug from a very early age. And my sister also works in the travel industry. It’s in our blood.’

The decision to train with ACCA at the company after completing a business degree was a good one,’ he says. ‘They are very supportive here and paid for my study [the TUI Finance Academy is accredited with ACCA]. We invest a lot in people and that pays dividends – we have a very low attrition rate.’

Murray left the company as a finance manager but returned in a business partner role, which has been very fulfilling, he says. ‘Moving to a more commercially focused role suited my skillset.’ That means unpredictable days and a wide remit, which has included working with the M&A team to dispose of eight hotels owned by the group. ‘Anything can happen on any given day,’ says Murray. ‘I have to deal with events like disruptive weather conditions and Brexit, and we employ 450 seasonal workers on the European continent, so I’m often dealing with labour laws. I’m also responsible for all the foreign exchange hedging. Travel is a very low-margin business, typically a maximum of 5% EBIT, and 80% of our currency spend is in euros, so there’s a lot of cost uncertainty at the moment.’

As an example of the unpredictability and uncertainty that Murray has to deal with, back in January a massive snowstorm swept through Continental Europe, dumping huge amounts of the white stuff across Germany, Austria and Switzerland. The scale of the storm would have caused considerable disruption on any day, but this was a Saturday – changeover day, when tens of thousands of tourists end or begin their holidays and are on the move between resorts and airports.

For Murray, this all meant a very busy few days. ‘My phone rang at 11pm,’ he says. ‘That’s not unusual – when something like that happens, everyone gets involved.’ In practical terms, he says, it meant securing customers alternative accommodation as a priority so they were not stranded at airports or resorts for the night. The fact that his customers could sit back while the company sorted out how they would get home is the major reason why the business, and the wider TUI Group, is so successful in the permanently challenging travel market, says Murray. ‘What we offer is a fully integrated customer experience, which means we own the customer journey from end to end. And because we are ATOL accredited, we are obliged to get you home if something goes wrong.’

The big priority of the past three years has been to integrate the business and its systems into the TUI Group. ‘When we split from Travelopia, we had to set up a standalone business as a holding position until we were integrated into the UK business. We’ve had to separate out the legacy systems and put in place a programme to identify cyclical synergy benefits and the most efficient structure, and then merge the core functions into the group.’ The original finance team of around 60 has been trimmed to 10 in the UK, plus 35 working at various resort offices.

There is, naturally, a lot of travel involved in the role, partly through necessity and partly because Murray feels it is important to be a customer of the company as well as an employee.

‘The opportunity to experience the product is part of what makes the travel sector so enjoyable.’ Murray recently went on a ‘shakedown cruise’, where TUI employees stand in as customers to test the performance of a new ship. Four years ago, he was asked to step in temporarily to replace a departing FD in India. ‘I was asked to go out to Delhi on the Thursday and was on a plane on Sunday,’ he says. ‘I worked one week out of every four in India for a while, carrying on with my regular job at the same time. It was a great experience. You have to be flexible in a role like this.’

Riding the ups and downs

Competition is fierce, and the possibility of an economic downturn is a constant threat. TUI aims to mitigate this by expanding into the digital market, having recently acquired tech company Musement, the market leader in excursions. This will strengthen TUI’s digital experience for customers and complement the integrated model.

The company carries out extensive customer research to ensure it understands what they need, and is investing in data analysis and technology to make sure the customer journey is as seamless as possible. ‘We need to be reactive to customer demands, change quickly and invest in the right areas. If we aren’t customer-centric, we will lose them,’ says Murray.

‘The travel industry is effectively a fast-moving consumer goods business, and we are susceptible to external factors such as the economy and the weather,’ he says. ‘Holidays are the first thing to go when families cut back, and a ski holiday is usually the second holiday of the year, so it is even more vulnerable. In the last recession, people still went skiing but traded down on accommodation, so we have to be sure we always add value to what we’re doing,’ adds Murray. ‘Families can pay out £5,000 for a ski holiday, so it needs to be as enjoyable as possible or they won’t come back. And if it is really good, they will.’

"My father worked for an airline, so I got the travel bug from a very early age. And my sister also works in the travel industry. It’s in our blood"

‘When looking at potential employers, consider their values and culture and how they invest in their staff.’

‘Emotional intelligence is very important – the ability to get the most out of people and deal with people at different levels.’

‘Listen before you speak. Everyone has different priorities and agendas, so FDs need to be good listeners.’