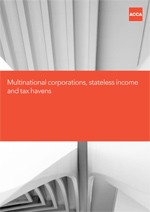 Nonetheless, the stateless income doctrine may be used as a catalyst for re-writing the corporate income tax system. In the same way that an old tax is a good tax, so an old tax system is likely to be a good tax system. If one were the accept Kleinbard’s argument at face value, then governments would need to modify substantially how corporate income tax works and various norms underpinning international double taxation agreements in order to redefine stateless income as being sourced in either the UK or the US (or indeed in any other economy).

The question that needs to be answered is this: ‘What would be the consequences of expanding the definition of source for corporate income tax purposes?’ At present ‘stateless’ income is not stateless at all, it is simply not UK- or US-source income. Stateless income is not some form of economic rent, as Kleinbard would have us believe. Rent can be taxed with impunity. To the extent that stateless income is really a return on the development and ownership of intellectual property, then increasing taxation will have allocative efficiency consequences. At the same time it would also adversely affect the Irish and Dutch tax bases. It is known, however, that multinational corporations add value to both their home economies and their host economies. Tax havens add value by allowing multinationals to reduce their tax liabilities while increasing their investments in high-tax economies. An increase in their tax burdens would reduce those levels of investment, leading to reduced employment opportunities, reduced consumption and reduced innovation.