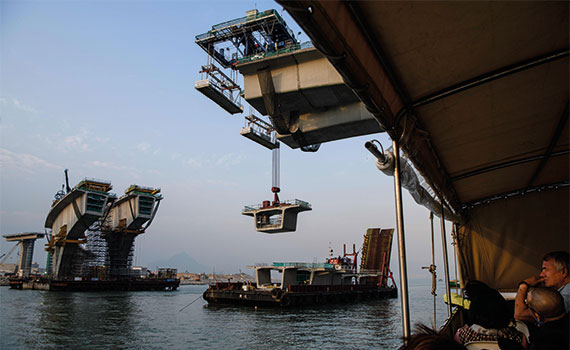 Rather than pitting its cities against each other and against more developed rivals abroad, China is adopting an approach that has worked elsewhere – such as in New York or Tokyo. The Greater Bay Area initiative – outlined in the 13th Five-Year Plan (2016-20) will integrate Hong Kong, Macau and nine cities in South China into a single integrated economic zone.

According to PwC, China’s Greater Bay Area could emerge as the largest ‘bay area’ economy in the world by 2030. With US$1.36 trillion in GDP already recorded in 2016, that doesn’t seem too far off.

The Greater Bay Area’s size and diversity is its greatest strength. But with 11 different economies and three jurisdictions, it also presents potential challenges, including how to develop a tax structure.

‘Hong Kong adopts a territorial taxation system where onshore profits are subject to the local corporate tax regardless of the taxpayer’s place of residence or incorporation,’ explains Ayesha Lau, managing partner at KPMG China’s Hong Kong office. ‘Companies incorporated in mainland China, however, are taxed on their worldwide income and non-resident enterprises are taxed on their onshore profits.

Lau notes that, in addition, corporate tax and individual income tax rates are generally higher in mainland China, which also imposes indirect tax on goods and services – for example, through VAT.

According to The Greater Bay Area Initiative – a new report from KPMG based on interviews with 614 business executives – the sectors most likely to benefit from the area’s development are trade and logistics, financial services and research and development (R&D) in innovative technologies. Finding an ideal tax structure to harmonise them is tricky.

‘If there are certain tax incentives for trading transactions among the Greater Bay Area cities – for example, offering a reduced tax rate on the relevant transactions – it can enhance the trade volume within the region,’ Lau says.

This echoes one of the key recommendations in PwC’s recent report, New Opportunities for the Guangdong-Hong Kong-Macau Greater Bay Area: to improve crossborder tax policies via bilateral agreements. PwC’s report also suggests that the mainland government should allow Hong Kong companies to set up branches in the Greater Bay Area to reduce their financing and tax burdens in the mainland.

‘We recommend allowing a Hong Kong company’s permanent establishments in mainland China to be subject to China’s corporate tax at a reduced rate of 16.5%,’ Choi says.

Agnes Wong, a tax partner at PwC Hong Kong, says addressing the needs of individuals is just as important. ‘One of the options that we have suggested is that the income of Hong Kong residents who work or are stationed in the mainland side of the Bay Area could be subject to a reduced China individual income tax capped at 15% in the mainland,’ she says.

‘For those who live in Hong Kong and work for an employer there but frequently travel for work in the mainland, we suggest that they could be subject to Hong Kong salaries tax only.’

Wong also suggests that the governments enter into a social security agreement, so Hong Kong residents making contributions to the Mandatory Provident Fund scheme are exempt from social contributions in the mainland. This could, she suggests, be applied to Macau as well.

Lau suggests that each city should identify its core competitive advantages and explore ways to complement one another.

‘One possible approach is to offer tax incentives to encourage R&D activities to be conducted in Shenzhen, Hong Kong or Guangzhou, and manufacturing activities to be carried out in Dongguan and other cities across the Pearl River Delta,’ she says, adding that KPMG is particularly excited about Hong Kong’s role in the area.

‘Hong Kong’s asset management sector will play a vital role in supporting wealth management,’ she adds. ‘Furthermore, corporations in the area could also use it as the gateway between China and the world, and as an international financial centre for fundraising, asset and risk management services – for example, for outbound investments in Hong Kong.’

Beyond taxes, Lau concludes, more cooperation is vital. ‘The most pressing issue is for local governments within the region to collaborate on a broad range of topics.’

One way to facilitate business and economic growth in the Greater Bay Area is to take a single unified approach for the entire region. Currently, there are different tax and regulatory structures for the nine mainland cities and the two special administrative regions in the area. Both Hong Kong and Macau are part of China but operate autonomously in most areas, with their own sets of laws, regulations, fiscal and monetary systems.

KPMG’s report highlights silos between and within the different governments as a barrier to development. Jeremy Choi, a tax partner at PwC Hong Kong, says that it might be worth considering developing a unified system for the entire area.

‘One possible idea is to treat the area as a single special economic zone such that corporates doing business and individuals working in the zone are subject to the same preferential tax treatment, regardless of which of the 11 cities they come from, and that goods can move freely within the region with zero/reduced tariff and simplified customs clearance procedures,’ Choi says.

However, he remains practical about the complexities. ‘Negotiation and close collaboration between the governments of the three places will be required to study the feasibility of this idea and work out the implementation details if it is determined that it is feasible.’