ACCA’s eighth International Public Sector Conference, held in Singapore, looked at the issues around talent, transparency and accountability in a digital world 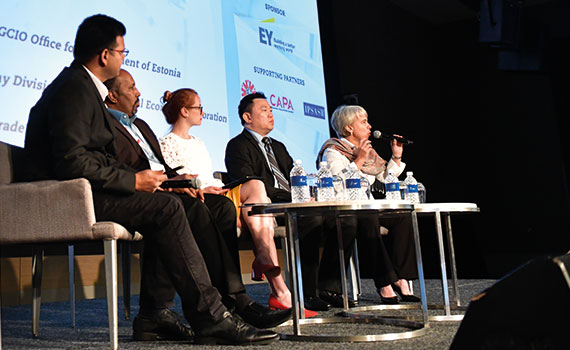 This article was first published in the May 2018 Singapore edition of Accounting and Business magazine.

In March, Singapore became the first Asia-Pacific host of the ACCA International Public Sector Conference. Co-organised by the Singapore Accountancy Commission (SAC), this year’s theme was ‘The Digital Public Sector’.

In his opening address, Alex Metcalfe, ACCA’s head of public sector policy, set the tone by suggesting that technology had created new opportunities for governments to interface with the public, as well as provide services and information at a never-before-seen scale.

Alan Hatfield, executive director – strategy and development at ACCA, noted that the conference came at a timely juncture as governments and partners now had a platform to learn more about challenges facing the public sector and to identify breakthrough ideas together. ‘This is part of the work we do: to develop a sustainable accountancy profession to support adherence to global standards, protect the public interest and support economic growth,’ he said.

Guest of honour was SAC chairman Chaly Mah. He described Singapore as a case study of how an open economy that traditionally thrived on its air and sea connectivity was being impacted by the pervasiveness of digital technology.

‘Traditional businesses are fast being replaced or enhanced by new business models and technologies such as blockchain, smart contracts, e-commerce and e-payments, a sharing economy and the internet of things,’ he said.

Mah said that it was therefore necessary for governments to ‘harness the value of digital innovations to power up productivity, efficiency and transparency’ to protect the future of their countries and put them ahead of the curve. ‘One of the government’s key strategies in positioning Singapore for the future is to foster innovation and the use of emerging technologies, develop deep capabilities, establish strong partnerships locally and abroad, and develop Singapore into a global node of technology, innovation and enterprise,’ Mah said.

While the digital age provides many new opportunities for the public sector, there are also numerous challenges that come together with it. One is the pace of change, which Mah said was evolving at an unprecedented pace – ‘not in a linear manner but an exponential one’.

This sentiment was echoed by Shaik Umar, assistant director of SMEs Go Digital at Infocomm Media Development Authority, who compared the pace and scale of disruption in today’s internet age to that of the mainframe era just a few decades ago. ‘Disruption used to be isolated and confined within the space of a sector or department,’ he said. ’Today, it’s massive and comes totally unexpectedly.’

Mah also cautioned that with data digitalisation, issues of privacy and security had become more crucial than ever. This was in line with the findings of ACCA’s 2016 report, 50 drivers of change in the public sector, which named cybersecurity challenges for government as the eighth most important global driver of change.

Shivaji Das, global head of public sector and government practice at Frost & Sullivan, added that cybersecurity-related threats were varied and extended beyond identity theft. ‘Fake news is one big area that governments have had to respond to,’ he said. ‘Governments are now interacting with their citizens over social media and have to face a lot of backlash when something goes wrong.’

Panellists and speakers went on to discuss ways in which finance professionals in the public sector could stay relevant. Mah said that they must be aware of changing expectations. First, they must take on a more strategic role. ‘CFOs need to be more than just the financial expert; they need to deliver change to the finance function to meet new challenges,’ he said.

Dr Koh Chee Wee, director (leadership and workforce capabilities) in the public service division of the Prime minister’s office, gave examples of how Singapore’s public service was preparing for the future. These included implementing a clear vision and mission across the service, redesigning learning and career support paradigms, and embracing technology. ‘We need to make sure that digital is not just for show but that it must be at the core for plans moving forward,’ he said.

In terms of professional education, Hatfield described updates to ACCA’s curriculum, including the introduction of a new Ethics and Professional Skills module, which rigorously assesses students’ ability to demonstrate best practice and principle-based approaches to ethical dilemmas. ‘In the age of automation and algorithm, these judgments become more and more important to a professional working in the public sector,’ he said.

Hatfield also discussed the quotients that ACCA had identified as being crucial for success, focusing in particular on the digital quotient, which encapsulates the awareness and application of existing and emerging digital technologies, capabilities, practices, strategies and culture.

"CFOs need to be more than just the financial expert; they need to deliver change to the finance function to meet new challenges"