Rise of the robots stirs talk of a robot tax 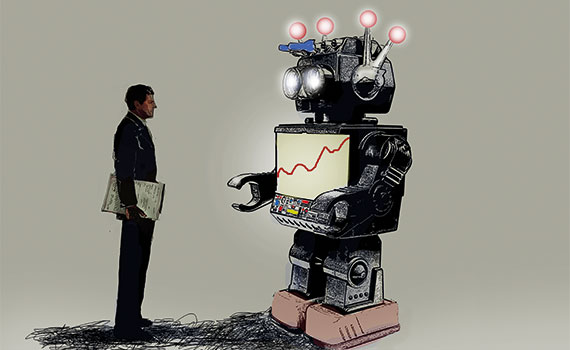 The philosopher René Descartes famously said ‘I think, therefore I am’, but for an autonomous robot the equivalent may be ‘I think, therefore I pay tax’. With the rise of robots equipped with artificial intelligence (AI), capable of choosing actions, learning from their environment and performing tasks better and faster than their flesh and blood developers, the question of their fiscal responsibility is occupying minds.

Microsoft founder Bill Gates set the debate alight last year by suggesting not only that companies using robots should pay tax on their (presumably greater) profits, but also that the robots themselves should be taxed. ‘Right now, if a human worker does, say, U$50,000 worth of work in a factory, that income is taxed and national insurance paid,’ Gates said. ‘If a robot comes in to do the same thing, you’d think that we’d tax the robot at a similar level.’

The root of such thinking is that an autonomous robot is fundamentally different from a machine such as an assembly plant paint sprayer, an Alexa personal assistant, or even a smart fridge. Autonomous robots can create valuable goods and services. And they can spend money through consuming electricity and parts, just as humans buy food.

The European Parliament discussed last year whether robots could become autonomous enough to be granted legal personalities (duties and rights separate from their human developers, who could not realistically foresee how their creations might behave). It warned that if a bot functioning as a nursing home companion went rogue and punched an elderly human resident, EU directive 85/374/EEC governing liability for defective products might not apply. And if robots could be sued, they might need to be paid to be able to cover any damages. And if they were paid, perhaps they should pay tax.

ACCA’s head of taxation Chas Roy-Chowdhury believes it would be hard to make a case for special taxes on robotics that lack autonomous AI, given that robots have been used in factories for years. But he adds: ‘If you have self-awareness of robots, where they are allowed into society as free-willed individuals, that’s where you cross the bridge and have to start thinking about whether they are taxable individuals.’

Olivier Boutellis-Taft, CEO of Accountancy Europe, an umbrella body for professional accountancy organisations, thinks that it is impossible to tax robots as individuals if they have no legal rights. ‘Until we have robot citizens and they are self-aware, I think that’s a philosophical debate,’ he says.

There is, however, the issue of whether robots’ owners should attract special taxes because the robots replace human jobs. The tax revenue could be spent on retraining and supporting the unemployed.

While an early draft resolution by the European Parliament suggesting a ‘tax on the work performed by a robot, or a fee for using and maintaining a robot’ was rejected, the European Commission has set up an expert group to draft guidelines for the ethical development and use of AI by the end of this year. In doing so, it raises some big questions, including how moral responsibility should be attributed and apportioned, and who is responsible (and in what sense) for untoward outcomes.

Roy-Chowdhury points out that studies have considered that the reduction in tax revenue brought on by high unemployment as a result of robot ubiquity might lead to a rethink of taxation policy to enable governments to function.

However, Boutellis-Taft says that singling out robotics for special taxation is fraught with potential difficulties, notably a legal definition of robots. Would this include chatbots that HR companies use to interview job applicants, for example, or assembly line machines networked with and learning from similar machines? Would it include accounting software that helps people complete tax returns, or technology that part-writes company reports? ‘There are a lot of really difficult questions about where you draw the line,’ he says. Basing taxation on how many jobs a robot might replace, for example, generates yet more difficult questions. Say a robot operates older machinery (for instance, a combine harvester), which in the past itself made many human jobs redundant, how could you make a fair calculation of the tax owed?

And on the other side of the equation, some businesses might exist only because they use robots. Boutellis-Taft points out that robots can create jobs rather than replace them. ‘Our tax systems were developed on a totally different economic model and are gradually reaching exhaustion,’ he concludes.

The Frankfurt-based International Federation of Robotics (IFR) thinks current liability laws are sufficient, for the time being at least. Perhaps understandably, it is against taxes on robots – whether as autonomous economic agents or on companies using lots of AI. ‘Profits, not the means of making them, should be taxed,’ says Joe Gemma, president and CEO of Kuka Robotics, and IFR past president. He argues that the use of industrial robots to carry out repetitive or dangerous tasks creates safer, higher skilled and higher salaried jobs.

How the rest of the world will ultimately respond remains to be seen. South Korean president Moon Jae-in’s government announced in March it would reduce tax breaks for investment in industrial automation equipment. And in the US, a member of San Francisco’s city council has created a committee to explore options for extending the city’s payroll tax to companies using robots to perform jobs humans currently do.

Meanwhile, in Geneva, the International Organization for Standardization has established a technical committee for robotics, which has 12 standards under development. The committee’s strategic business plan acknowledges that resolving ethical and legal issues is a priority: ‘Coherent strategies for adopting autonomous features are urgently needed and need to be developed with related disciplines.’

The rise of the robots – and the need for concrete action on the issue of taxation – is still some way off, though. The US car industry, for example, installed more than 60,000 robots between 2010 and 2015, while expanding its human headcount by 230,000. And the IFR points to McKinsey Global Institute research that found that more than 90% of occupations will not be fully automatable in future. For the time being at least, robots and humans will work together, hopefully in harmony.

"If you have self-awareness of robots, allowed into society as free-willed individuals, you have to start thinking about whether they are taxable"