While opportunities for women in the workplace have never been greater, there is still work to be done, guests at the launch of the ACCA Malaysia Women’s Network heard 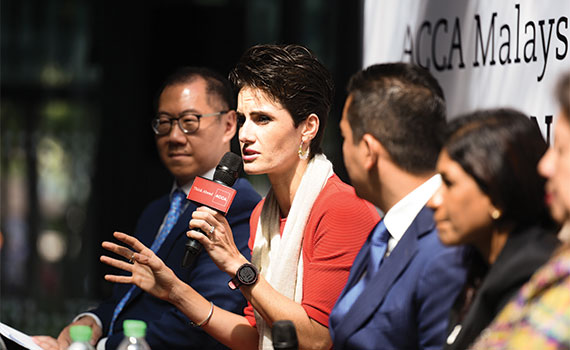 This article was first published in the May 2018 Malaysia edition of Accounting and Business magazine.

Although there are now more women in the workplace than ever before, the proverbial ‘glass ceiling’ is still thwarting female careers and ambitions. ‘This glass ceiling may have been cracked,’ she said, ‘but it’s certainly not smashed.’

It was no coincidence that the ACCA Malaysia Women’s Network was launched on International Women’s Day (8 March). Urging business leaders to ‘lead the charge’ for gender pay parity and equal opportunities, Dato’ Merina acknowledged that it was imperative for ACCA to walk the talk: ‘I am proud to be part of an organisation that embraces diversity so openly and thoroughly,’ she said.

Women make up 59% of ACCA’s membership in Malaysia so it is only natural to offer a platform for networking, sharing insights and supporting women who want to take on more senior roles in the profession, Dato’ Merina pointed out. She described how the network will offer young, aspiring female ACCA members access to senior members who can act as mentors, together with programmes and networking opportunities that cater to their needs. This is important, she added, as meeting the needs of the talent pool means that the future needs of employers will also be met; recruitment strategies are thus an integral part of the diversity plan.

While it is important that tone should be set from the top, any progress made should also be measured because ‘what’s not measured can’t be managed’, Dato’ Merina noted. ‘Equality isn’t just for International Women’s Day; it’s an important part of our history and our future,’ she said.

Datuk Alexandra Chin FCCA, network chair and ACCA past president, stressed the need to take a wider view and seek progress on social mobility. She pointed out that unequal access to opportunities still exists for many women – as well as men.

The guest of honour at the launch was Vicki Treadell, British high commissioner to Malaysia. As a strong advocate of women’s empowerment, she was delighted to officiate. ‘Efforts like this are in line with government policy that puts the interests of women and girls first,’ she said. ‘In the UK, we do so by ensuring that girls get the education they need to succeed in their career and life. This will create economic and business implications which will benefit the nation.

‘Women need to believe in themselves,’ she added. ‘The ACCA Malaysia Women’s Network will encourage women and raise their confidence and self-belief. When we press for progress, our motivation shouldn’t be just about us. It should be about how we create a better environment – and a better world – for all.’

The launch included a panel discussion with Datuk Chin; Jessica Macias, development director at Lean In Malaysia; Andrew Chan, consulting leader at PwC Malaysia; and Sugunah Verumandy, head of industry partnership & Malaysian professional talent at TalentCorp Malaysia. While Chan was not completely convinced that a barrier to progression existed, he conceded that change would eventually happen.

Macias felt that although we live in better times than those previous generations did, when we ask ourselves how far we have come, the answer is ‘we’re nowhere close’. ‘The reality is that it seems more likely that we will have a human colony on Mars before we reach gender equality,’ she asserted. ‘The fact that we have to celebrate International Women’s Day demonstrates there is a problem.’

Verumandy pointed out that research has shown that having a diverse team that includes women primarily in decision-making positions has enabled businesses to penetrate into new markets; outperform businesses and increase return on equity.

It is also welcoming to note that in Malaysia there is a major shift in conversations, from why businesses need to include women in board or decision-making positions to how businesses can facilitate inclusion of women in such positions. Having said that, ‘we need to move faster and do more’, she urged.

However, one of the most pressing issues in Malaysia is that women take career breaks to start a family or take care of family members – then never go back to work. If talent is to be retained, employers will have to provide a supportive environment where work-life practices can be achieved, underpinned by appropriate business practices, said Verumandy.

Women are also held back by their own limiting beliefs. ‘Every woman has a strong inner voice but it is often blocked by the fear of not being liked. Women are more afraid of being disliked than being disrespected,’ Macias said. ‘We hold ourselves back because we fear other people might not like us because society has conditioned us. We must let go our fears of being disliked because it’s OK not to be liked. It’s not OK to be disrespected.’

Warning that women sometimes created their own glass ceilings by waiting for things to happen rather than making them happen, Datuk Chin urged that they empower themselves to achieve their dreams, adding: ‘We shouldn’t wait for someone else to do it for us!’

ACCA: a history of firsts