Kenyan-born Anita Kerai FCCA, presenter on Simply Good Food TV, explains why she gave up a successful career in finance to build her own cookery brand 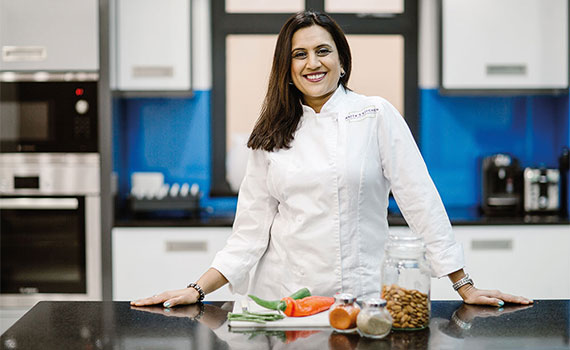 At one point in her career, Anita Kerai was unsure whether to call herself an accountant, chef or TV presenter, but now she is clear: ‘I am a food presenter and I want to be a worldwide brand.’

This ambition first surfaced while she was working as an accountant in London (see CV box). ‘For years my work colleagues had been telling me to do something about the fact that I enjoyed cooking,’ she explains. ‘They used to admire my lunches.’

Cooking has been part of Kerai’s life for as long as she can remember. ‘Food is in-built; cooking is not a chore,’ she says. ‘I would come home from work and want to cook.’ For her it was all about relaxation. While others chose to settle down in front of the TV, Kerai took pleasure in preparing meals. ‘My kind of meals take 30 to 40 minutes to prepare,’ she says. ‘They are easy and fulfilling – it’s not about slogging in the kitchen.’

Born in the Kenyan capital Nairobi, Kerai considers herself British but describes herself as having Kenyan Indian roots. She studied accountancy at school, then as a young woman moved on her own to London, arriving in 1997 to complete her accountancy studies and work while qualifying. She chose the ACCA Qualification because ‘it was the one that could get you places and open a lot of doors’.

Before she took up cookery full time, Kerai had a successful career in finance, focused on media. ‘I have been in the entertainment sector for so long,’ she says. ‘I enjoy the thrill of lights, camera, action.’ Her first foray in front of the camera was as the presenter of her own cookery show on mobile app Simply Good Food TV, which has more than 570,000 viewers. She says: ‘I thought, why not incorporate presenting [with cooking] to show how easy it is to cook healthy meals?’

Earlier this year Kerai returned to her Kenyan roots to film a seven-part TV series Return to Kenya and do research for a self-published book, Flavours of Kenya, both due out in September. Kenyan cuisine, which uses ingredients such as maize, beans, plantains and papayas, is little known outside Africa.

With a crew of three – a production manager, a camera operator and a runner – she travelled around her childhood haunts, filming in hotels, elephant sanctuaries, a rhino sanctuary, national parks, tea plantations, sports grounds, markets and the urban haunts of street food sellers. ‘Growing up, cricket was part of family life, so we filmed at Nairobi Gymkhana Club, for example,’ she explains.

In the series, Kerai explores how the two cultures of her heritage have blended. ‘I recognise myself more as a Kenyan than an Indian,’ she says. The show is also meant to promote Kenya as a must-see tourist destination.

For her, highlights of the trip were a visit to the David Sheldrick Elephant Sanctuary and to Swaminarayan Embakasi Academy – a school in Nairobi set up and funded by Shree Cutchi Leva Patel Samaj. Here, she talked about healthy eating to 300 pupils and teachers, cooked ‘kidney beans khichri’, and played football with the youngsters.

Returning to Kenya was an emotional journey. The house Kerai grew up in has been replaced by a block of flats, and she was aware of a significant increase in traffic and construction work in Nairobi. However, her return to Mount Kenya National Park did resonate with childhood memories.

‘When I was in the national park, and also when meeting people I cooked with on the street, I felt that Kenya was my other home,’ she says. ‘Every experience felt like cooking with friends.’

As an ACCA member, Kerai is well placed to reflect on the commercial aspects of the project. She says: ‘All the expense connected with filming in Kenya feels like an investment in my future. The part of my brain that ensures the project makes financial sense is still there; it has not gone away.’ Kerai has plans to make the series available on Amazon Prime, and is in talks to sell it worldwide.

Her vegan and vegetarian cooking philosophy stems from her Hindu faith, which means no eggs, although dairy is permissible.

Hinduism places so much emphasis on food that it has been called the ‘kitchen religion’. Kerai’s background has also made her keenly aware of food waste. ‘Growing up in Kenya meant I was in a green environment, but also I saw a lot of poverty. I know what wasted food and water means.’

She says cooking is a life skill that everyone should have. Her passion for healthy eating and simple cooking has led her to work in schools as one of UK chef Jamie Oliver’s voluntary ‘food revolution ambassadors’. In promoting healthy eating in schools, she is looking to combat obesity. ‘Educate one person in how to cook and you’re teaching the whole family,’ she explains.

Reflecting on her career, Kerai says: ‘ACCA gave me a path to enter all these companies. It has shown me that every business needs a financial brain. If you want to be successful, you need to know your numbers.’

At the end of 2016, a year after she joined consumer behaviour specialist Kantar Worldpanel, the company underwent restructuring. With changes also happening in her family life, she started to ask herself whether she should follow her passion.

After taking some time off she began looking round for a part-time accountancy role. ‘But I wasn’t looking with my heart,’ she admits. ‘So I decided to start doing cooking – the other part of my life I knew I was good at.’

That decision was not a sudden one. Kerai says accountancy has made her cautious about the choices she makes. ‘I always ask, what is the value? ACCA has given me the skills to progress – as well as accounting skills, it is people skills that have got me to where I am.’

The journey towards being a celebrity chef started with a six-week intensive course on how to be a food presenter at Leiths School of Food and Wine in London, which she took in February 2017. ‘I had been thinking about the course for a while and then one evening I just pressed the button [to apply].’

But learning to be a TV chef was harder than she expected. ‘At one time I thought, “Oh my days – what have I done?” The cameras are everywhere, you’re wearing an earpiece, you have to watch what you are saying and where you put your hands – and make sure you don’t burn the food, while all the time still smiling.’

Her business is developing fast: she runs cookery classes in her kitchen at home in Harrow, London. ‘It’s not cheffy; it’s like cooking with friends, and you learn while chatting,’ she says.

She broke into TV at the end of 2017, when she started presenting on Simply Good Food TV. She is on every Monday. ‘TV is my focus and the strategy for developing the brand,’ she says. ‘People want to see what you’re cooking. There’s a 20-second chance – if they like it, they follow you.’

She got the gig by walking up to the station’s owner, Peter Sidwell, at an exhibition and saying: ‘I’m a food presenter – can we see what we can do together?’ With the Kenya series and book just one of several projects in the pipeline, Kerai’s worldwide brand ambition looks a long way from being a half-baked idea.

"I felt that Kenya was my other home. Every experience felt like cooking with friends"

"I thought, “Oh my days – What have I done?” You have to watch what you are saying and not burn the food, while all the time still smiling"