Have the lessons of the 2008 crash really been learned?

Ten years on from the financial crisis, Ireland’s economy is booming once more, but making sure the mistakes of the past aren’t repeated remains a challenge 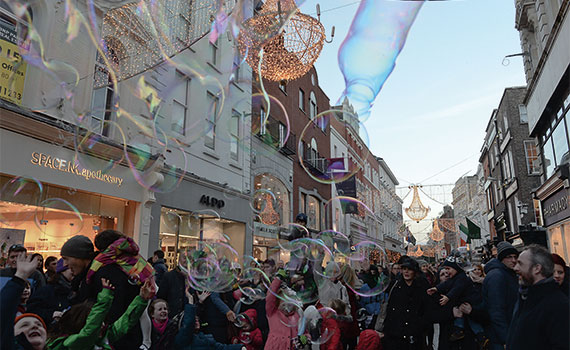 Groupthink – the intolerance of dissent and difference along with the placing of an inordinately high value on relationships rather than rules – has prevented a culture of whistleblowing from taking root in Ireland, boosting cronyism and weakening regulation, economists and regulators have been warned.

A conference in September organised by the National University of Ireland to assess the country’s economic and regulatory health 10 years on from the onset of its financial crisis heard from Colin Murphy, playwright (and screenwriter of The Bailout, a TV dramatisation of the banking collapse) on how the effects of groupthink had worsened Ireland’s banking crisis and related property crash.

And while Ireland has since sought to legislate for and encourage a culture of whistleblowing, putting in place the Protected Disclosures Act 2014, Kate Kenny, professor in management and organisation studies at Queen’s University Belfast, told the conference that its implementation remains a ‘work in progress’ in the banking and accounting community. Corporate offices have yet to properly staff the confidential in-house whistleblower point-person role required by law, added Kenny, who also wants the role better promoted among staff in all organisations.

On the plus side, the country has recovered from the crash, certainly according to employment figures indicating that the number of Irish residents at work is now back at pre-crisis levels. Ireland’s banks are also better regulated and ‘unlikely’ to be the source of the country’s next economic dip, according to Patrick Honohan, governor of the Central Bank during the crisis. He, however, warned the conference that ‘the next crisis is likely to be in the loss of tax of US corporations’ in Ireland’s foreign corporate hub, with this vulnerable tax revenue currently ‘being spent like it will always be there’.

Professor John McHale of the National University of Ireland, Galway, who chaired Ireland’s Fiscal Advisory Council from 2012 to 2016, agreed. He pointed to a surge in the corporate tax take (from €4bn in 2008 to the current €8.5bn) from the Irish offices of multinationals, some of which is unrelated to any rise in Ireland-based activity. ‘Yet these tax receipts are being spent at the same rate as they’re being collected,’ warned McHale, who wants governments to run a surplus (Ireland passed its first balanced budget since 2007 in October this year). ‘We could see a significant deficit very quickly if the tax take changes.’

More prudence would enable Ireland to build on its strengths. Honohan noted that euro membership has been good for Ireland and remains so, taming the inflation that used to run at double digits in the 1970s and 80s. And while Irish interest rates may be higher than in other parts of the eurozone, they remain at historic lows for the country, particularly compared with the spikes of the 1980s. ‘Banks have decided to track British bank rates and will reduce interest rates only when faced with new competition,’ said Honohan.

McHale said that the corporate tax spend is worrying, suggesting hard lessons have not been learned from the crash, which was caused by Irish government profligacy in the preceding decade, spending tax receipts from an unsustainable property boom. It was this, not the bank bailout that followed the crash and the repayment of €85bn in bailout loans, that forced the government to cut back spending, he said. ‘The spending had to be adjusted, that’s why we had austerity.’

While the European Central Bank did prevent the ‘burning of the bondholders’ in 2010, it also furnished the funds that allowed crippled Irish banks to pay back their creditors – something that government would not have had the resources to do on its own. ‘Likewise, the refinancing of net debt was done at very favourable interest rates [to government],’ Honohan noted. Contrary to popular perception, subordinated bondholders lost €14bn in the meltdown of the Irish banking system, while foreign shareholders (including banks) lost €28bn, he added.

The solutions to the global financial crisis may in effect be the seeds of the next crash, the conference was warned by Angela Knight, former CEO of the British Bankers’ Association. Global harmonisation of banking rules means that future crises will be harder to contain. Globalisation has also created ‘bigger outliers’, such as the secretive economic management system in China, which now has major investments across the world. And quantitative easing means central banks hold more government debt than in the past. ‘In that case, where’s your firepower [in the event of a future crisis]?’ she added.

Another threat to recovery is a resurgence in pay demands, according to economist Frances Ruane, former director of Ireland’s Economic & Social Research Institute (ESRI), who pointed to a push for ‘restoration’ of pay cuts imposed during the crash. She warned: ‘We are now returning to business as usual without reflection of what the economy needs.’

Indeed, Ireland needs a ‘rainy day fund’, according to McHale (around €20bn was taken from the pensions reserve fund in order to recapitalise Ireland’s banks), so that it has the financial firepower to deal with future downturns. Likewise, he said, government needs to ‘institutionalise the memory’ of the crash by heeding the advice of bodies such as the Fiscal Advisory Council and exercising good housekeeping during the good times.

"Tax receipts from US corporations are being spent at the same rate as they’re being collected. We could see a significant deficit very quickly if the tax take changes"

Ireland borrowed €85bn in a bailout from its EU partners and the International Monetary Fund (IMF).