MIA president Dato’ Mohammad Faiz Azmi, executive chairman of PwC Malaysia, sees the institute as instrumental in the revamp of the profession in Malaysia 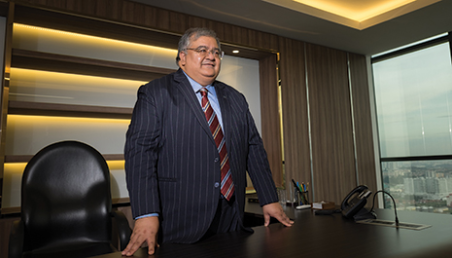 This article was first published in the November/December 2016 Malaysia edition of Accounting and Business magazine.

Dato’ Mohammad Faiz Azmi bemused reporters at a recent press conference when he spoke about a mobile app that turns his iPhone into a Geiger counter. Asked why he needed such a thing, he quipped, ‘You’d be surprised what we accountants do.’

In fact, the app provided some comfort to the president of the Malaysian Institute of Accountants (MIA) on a working trip to Japan in the wake of the Fukushima nuclear disaster. And thanks to another app and a plug-in gizmo, his phone also doubles as a wind meter. You might say he is the sort who likes to know which way the wind is blowing.

However, Faiz’s interest in collecting gadgets and technological aids has not so far produced an app or device that can specifically help him in his role as MIA president. That depends rather on leadership, organisation, stakeholder support, political will, and yes, a little luck – particularly at a time when Malaysia’s accounting fraternity is facing an overhaul, based on recommendations put forward by the multi-agency Committee to Strengthen the Accountancy Profession (CSAP).

Faiz, who is executive chairman of PricewaterhouseCoopers Malaysia, is very aware of the challenge the profession faces. In an address to the MIA annual general meeting (AGM) last year, his first as president, he recalled his mother asking how he felt about taking on that responsibility.

He told her he felt proud and humbled, yet conscious of the immense challenges ahead – understandable in the light of what he intends to achieve as MIA president. Two interlinked items dominate the agenda for the next few years. The first is to be instrumental in the implementation of the recommendations of the CSAP, and the second is to reshape the MIA itself through a strategy known as 3R – repositioning, rebranding and recruiting.

In December 2014, 18 months after the CSAP was set up, it issued its report detailing strategies and measures to strengthen the profession and increase the contribution accountants make to the country’s competitiveness.

The first of the report’s 15 recommendations proposes the establishment of a new regulatory body (NRB), which would relieve the MIA of its regulatory function and require it to operate in future purely as a professional body.

But things have changed since the report was published. Faiz was asked to chair the implementation  committee (IC) of the CSAP, the panel charged with putting into effect the recommendations. He believes that » the MIA should continue to bear part of the regulatory load.

Faiz’s appointment as head of the IC was made, he feels, because the regulators acknowledge that it should be the profession that moves the changes along.

Elsewhere in the Asia-Pacific region, regulator-driven attempts to restructure the accounting sector have faced difficulties because the profession has not been supportive.

‘Our regulators don’t want to destroy what’s already working well,’ says Faiz. ‘If the profession is willing to accept and implement the CSAP recommendations, they are open to the MIA doing the implementation. But there will be a strict due process.’

As part of this due process the MIA needs to come up with proposals for amendments to the Accountants Act that are acceptable to both the IC and to the regulators.

The members of the IC represent the same bodies that make up the CSAP – namely, the Securities Commission (SC), the finance ministry, Bank Negara, the Companies Commission of Malaysia, the Accountant General’s department and the MIA.

Drawing on his six-year chairmanship of the Malaysian Accounting Standards Board (MASB), Faiz is convinced that the best regulatory model for the profession is one that follows the tandem operation of the Financial Reporting Foundation (FRF) and the MASB.

The FRF is a trustee body that oversees the MASB’s performance and financial and funding arrangements. It is also an initial source of views for the MASB on proposed standards and pronouncements. However, the MASB is solely responsible for setting standards.

Faiz argues that a similar relationship would work well between the NRB and the MIA because the arrangement pairs a lean yet empowered supervisory body with an institution that has the experience, know-how and capacity to handle the profession’s heavy lifting.

The NRB, he explains, should deal with ‘the more serious matters’, such as policy development and looking out for the public interest and the needs of the country.

He does not however see the wisdom in establishing a fully funded NRB with a sizeable staff. To him, judicious allocation of resources is fundamental.

‘I think the resources should go to those activities where there is a strong element of public interest. But if the authorities eventually decide that the NRB should have lots of money and people, somebody will have to find the funds to make that happen,’ he says.

‘The NRB should be focusing on those jobs that need regulation, such as licensing requirements for tax, audit and insolvency work. It should be taking care of this area because it involves the public interest,’ he says.

He cites another example: if Malaysia aspires to become an accountancy training hub, who better than the NRB to help secure visas for the foreigners who have completed their accounting courses here and are staying on to acquire the requisite work experience?

‘That’s why it’s important that the NRB has a much wider ambit to ensure that what we are doing fits with what the country wants, and that its policies interact with the rest of the economy,’ he says.

Future of the MIA

As for the MIA, which celebrates its 50th anniversary in 2017, he is confident that it is a strong national body willing to play its role in helping to look after the profession, with oversight and guidance from the NRB. However, that future hinges on the institute being able to persuade the IC and the regulators to see things its way. Faiz acknowledges that there is some awkwardness in the fact that he leads both the MIA and the IC, but insists that there is no question of the MIA imposing its will on the revamp of the profession. After all, he says, the MIA is not introducing changes in the CSAP recommendations other than to make a case for it to play a critical role in support of the NRB.

‘I’m speaking from an MIA point of view, of course. I still have to work hard together with the IC members to find an acceptable operational model and only then will we be able to submit these recommendations to the SC and the finance ministry for approval,’ he explains.

On the other big item on the MIA’s agenda, the 3R strategy, Faiz says its aim is to prepare the institute for the post-CSAP landscape and to address a number of shortcomings.

Repositioning is about taking stock of where the MIA is at present, gauging members’ expectations and mapping out how the institute will meet the demands of the new environment.

Rebranding initiatives will focus on the MIA’s value proposition to all sectors of accountants and on communicating its new brand promise to stakeholders.

Recruit, the third prong of the strategy, is a response to the CSAP estimate that by 2020, Malaysia will need 60,000 professional accountants to serve the needs of a developed economy and to maintain the competitiveness and resilience of the country’s enterprises.

The MIA is keen to play a part in ensuring that Malaysia can maintain the supply of accountants without sacrificing quality. To this end, it wants to sell to young people the idea that if they join the accounting profession, they will get the chance to work with diverse, intelligent and passionate people, and that the profession offers unlimited opportunities to everyone, regardless of their background. A strong and clear-sighted MIA will go some way to achieving this goal.

"If the profession is willing to accept the CSAP recommendations, the regulators are open to the MIA doing the implementation"

When Dato’ Mohammad Faiz Azmi put his name in the hat for MIA president, he was fully aware that the person holding that post would have to deal with the CSAP recommendations for resetting the country’s accountancy profession.

It was not an easy decision to make, but he says he was inspired by the Winston Churchill quote about never letting a good crisis go to waste. ‘You can sit and complain about something, or you can go out and fix it. So I felt it was time to get it fixed and I was happy to step up to do it. I want to give something back to the profession before I retire,’ he explains.

Faiz was elected president in July 2015, bringing to the table a unique blend of experience and abilities. He has been employed in audit and business advisory services for almost three decades, and has seen the profession from the other side, as chairman of the Malaysian Accounting Standards Board. He is also legally trained, having read law and been called to the Bar in England. This may come in useful in the drafting of amendments to the Accountants Act.

Asked about his leadership style, he describes himself as ‘very output-driven’. He adds, ‘To me, it’s about the outcome. Yes, we need to hear people’s views, but at the end of the day, we need to make a decision.’

His term as president ends in July 2017. It is not yet known if he will serve a second term. But he has this to say: ‘I have unfinished business. I came in to sort out the CSAP recommendations, and hopefully I can do some good before I leave.’

1. New regulatory body to be set up

4. Increase support to SMEs and SMPs

5. Widen pathways into the professions

7. Make accountancy the profession of choice

9. Encourage cooperation between the industry and universities

13. Nurture SMPs that are relevant to SMEs