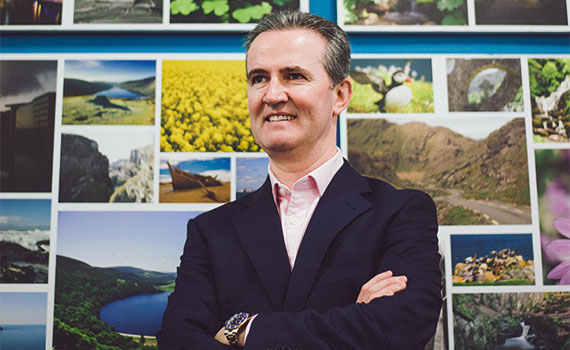 A few years ago, Dell Financial Services, a finance provider for customers of Texas-based IT company Dell Technologies, set out to move beyond its North American heartland. Key to its targeting of European business was Ireland, where the customer financing company had set up an Irish regulated bank, Dell Bank International.

Naturally, there was a perfect Irishman for the job. Colin Keaney had already spent three years as Dell Financial Services’ European CFO and chief operating officer in Ireland. In 2014, he moved to Austin, Texas – Dell’s historic home, Michael Dell having founded the IT company in 1984 while a student at the University of Austin – to take the reins as global CFO of the company and head up the great expansion.

So how is it that Keaney got the plum role of leading the European expansion of Dell Financial Services? Keaney explains: ‘As luck would have it, early in my career I was fortunate enough to be involved at the beginning and evolution of what are now very large and successful businesses.’

From the outset of his career, Keaney has worked in US multinationals, holding finance positions in manufacturing startups in companies such as Intel and Hewlett Packard. Eventually, after filling progressively senior finance roles with HP, he joined CIT Group as its European CFO; in 2011 he moved over to Dell Financial Services as its European CFO and chief operating officer, and is now working globally with the company.

Dell Financial Services’ parent company, Dell Technologies, is a major provider of end-to-end IT solutions and services, with operations in more than 100 countries. Originally set up in 1997 to provide direct financing in the US and Canada, Dell Financial Services is Dell’s financing arm. It operates as a captive finance company in 23 countries, has over $7bn in assets and annual revenue of $1bn. It facilitates purchases of Dell products and services through various financing options such as consumer and small business revolving accounts, and fixed-term business loan and lease financings.

As far as his acumen for finance leadership goes, Keaney recalls the aspirations of his youth. ‘I was fortunate to know what I wanted to do at a reasonably young age, and as a child I was always numeric in nature and had a great interest in business matters and things commercial. Also, being the youngest of a number of siblings, I was likely influenced by my older brothers, who were also business students.’

While attending Dublin Business School, Keaney started out on his ACCA studies, and became an FCCA in 1991. This training would form the basis for his advanced studies in business administration, followed by an MBA from Strathclyde University in Glasgow in 1996.

In looking back on his formal education, he says: ‘When I think about the foundation that the ACCA gave me, the most important feature was the breadth of opportunity. It opened the door to working in many industries. There’s always an accounting/finance angle, whether it’s technology, or the aviation industry, or whether it’s oil and gas.’

He adds: ‘The ACCA designation is highly regarded as a professional qualification. It gives you broad knowledge and insight into business, how it works, and the risks associated with commercial enterprises. And if you look at the global reach of the qualification, it’s not something that is unique to just Ireland or the UK – it is respected as an international qualification.

As far as ACCA training is concerned, Keaney points out the benefits of the blended scope of the curriculum. ‘What I liked about the ACCA designation was that it combined technical training – which delivers the building blocks of accounting practice – with management accounting, data analysis and strategic planning.’

After completing his accounting education, those early days in startup organisations would leave their mark on the young finance executive. ‘It was very exciting and satisfying being at the beginning of a business, taking something which was a concept or a business plan, and seeing it rolled out as part of a team,’ he says. ‘It demanded that you develop your skills and learn how to take the initiative. In those situations, you sometimes start with a blank piece of paper.’

‘However,‘ he says, ‘what was critical was the financial commitment from Dell. The investment that Dell put into this process ensured from day one that we had the right people, the right systems and the right tools in place to get this done.

‘It was probably the accounting and reporting in multiple jurisdictions that was the biggest challenge in setting up Dell Financial Services, but I look at it as a great opportunity; as a finance executive it was very satisfying to put that in place.’

The job of establishing the banking and leasing organisation in Ireland from scratch would be no easy feat, he explains, and the more challenging aspects revolved around the regulatory environment. ‘It was essential that we made sure that everything we put in place from a systems and accounting perspective allowed us to report to the regulators on time at a highly detailed level,’ Keaney says. ‘The bank, and our back office, risk, accountancy and audit functions would all be based out of Dublin, so we needed to report both in IFRS and US GAAP, under local and US currency. We also had to report various items like VAT and withholding taxes. Essentially, we had to report in a compliant and timely manner across multiple dimensions to a variety of different stakeholders.’

As to what makes for a successful finance function in a global organisation, Keaney says: ‘It’s critical that our team is able to understand the environment of the company. We look for flexibility and entrepreneurial spirit, specifically in finance.’

Although he’s now back in Dublin, Keaney retains a hint of Texas drawl. ‘When you cross cultures you’re bound to pick up a bit of the local slang,’ he says. ‘However, despite the cultural differences in expression or other manners of speaking, it’s the international bond of the organisation’s culture that keeps everyone on the same page.’

"It was very exciting being at the beginning of a business. In those situations, you sometimes start with a blank piece of paper"

‘Be open to different cultures and learn to adapt. If you are a finance executive in a startup situation, you have to have a level of adaptability. You need the ability to collaborate and work as a team, particularly in a multinational environment. As part of an international organisation, you have to understand and appreciate the differences between people and cultures across the globe.’

‘Broaden your scope. As a CFO you do need to be involved in all aspects of the organisation, and understand the risks of your business.’

‘Know your role as an innovator. Ultimately, consider how technology will change not only your finance function, but your business as a whole, and how you can benefit from technological innovation. Encouraging innovation is important, particularly in a business such as financial services and technology, where change is the norm.’

‘Don’t be afraid to push the envelope as a leader. The ability to challenge the status quo is critical in a leadership role.’

‘Above all, integrity is key. Innovation and change has to be carried out in a way that preserves integrity of the organisation. It’s really important you do things in the right way, with no compromise to integrity.’