As Equitable Life’s CFO and deputy CEO, Simon Small FCCA is in the unusual position of overseeing the winding down of the 255-year-old insurer since it closed to new business 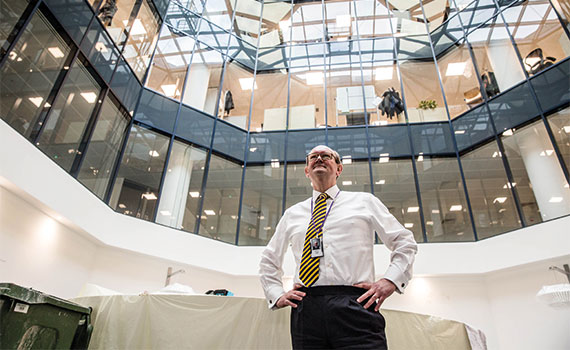 Insurance companies rarely become a household name for good reasons. So it has been with Equitable Life, once the UK’s largest mutual insurance company and second-largest life insurer, but now synonymous with policyholders infuriated by the society’s attempts to renege on its promises. At the peak of what became known as the Equitable Life affair, hundreds of its pensioners protested outside parliament. Its management, auditors and regulators were investigated, and headlines screamed.

‘At the peak of it all there were hundreds of angry people turning up at our AGM,’ says Simon Small FCCA, Equitable Life’s CFO and deputy CEO (a post, to be completely clear, he took up several years after the fateful events occurred). Today, 17 years after Equitable Life was closed to new business, something resembling pride in the company is returning. Most significantly, Equitable Life’s flag is flying again outside its Aylesbury offices – a symbolic but important gesture to the employees inside. ‘We don’t want to hide. The people who work here had nothing to do with the decisions that led Equitable Life to this,’ says Small. ‘They’ve taken a lot of abuse but they are very loyal.’

Equitable Life is a very different organisation today. It is, essentially, fading away – at some point over the next 20 years or so, it will cease to exist. With no new business written since 2000, the focus has been on extracting the best possible value for its existing policyholders, for as long as they need it.

Founded in 1762, Equitable Life was a respected British institution when it hit the buffers at the end of the last century. The root of its problems lay in the 1950s, when the society started to sell (unhedged) policies with a guaranteed annuity rate (GAR); it stopped selling guaranteed policies in 1988 but, with interest rates falling and inflation low, and with 90,000 GAR policies on its books, it quickly began to struggle to meet its annuity commitments.

At the beginning of 1999, Equitable began court proceedings that it hoped would allow it to cut the bonuses due to its GAR policyholders, on the grounds they were now unaffordable. The High Court ruled in its favour, but a group of affected policyholders appealed. Over the following two years, both the Court of Appeal and the House of Lords ruled in favour of the policyholders, leaving Equitable Life facing liabilities of £1.5bn. The society was put up for sale and, unable to find a buyer, closed to new business in December 2000. At that point it had 1.5 million policyholders and £35bn in funds under management.

It is very clear what had gone wrong. The Penrose report of 2004 said Equitable Life ‘was the author of its own misfortunes’, making overgenerous payouts that had resulted in underfunding. Accused of ‘practices of dubious actuarial merit’ in the same report, the company’s management resigned, and regulation was reviewed while the society fought to remain solvent and reach a deal with its policyholders.

Payouts to with-profits policyholders were cut and, in February 2001, Equitable’s sales force and non-profits policies were sold to Halifax for £1bn. A compromise deal was agreed in 2002: 70,000 GAR policyholders received a 17.5% increase in the value of their plans in exchange for surrendering their guaranteed pension rights, and 415,000 non-GAR policyholders gained a 2.5% increase by signing away their right to make a legal claim against Equitable Life. It is estimated that more than 500,000 Equitable Life policyholders lost money; the Chadwick report, published in 2010, put the absolute loss at between £2.9bn and £3.7bn.

Equitable Life needed careful and sensitive management for its remaining existence. But who would take on such a job? ‘I think every [finance professional] would have a natural bias against moving to a shrinking company,’ says Small. ‘Equitable Life was a closed book in run-off, and I didn’t know anything about life and pensions. When I was approached it didn’t sound like it was for me. But Chris didn’t take no for an answer.’

That’s Chris Wiscarson, CEO of Equitable Life since 2009 and, before that, group integration director at Lloyds Banking Group, where Small was the FD overseeing the integration of Lloyds and HBOS. ‘Chris was looking for a finance director for Equitable Life and it became apparent after a few conversations with him that there was an opportunity here to do wonderful things. It’s not a small business but I would have the chance to make things happen quickly.’ He joined the society in 2012.

Small’s role has focused on de-risking – selling off Equitable Life’s assets where possible, and balancing solvency and cash. ‘When Chris arrived here, the terminal bonus that policyholders received on retirement was zero. His mission was to create policyholder value – if we did our job right, the capital distribution to policyholders would increase,’ he says.

He adds that ‘the penny dropped’ in terms of the right approach when he realised that Equitable Life had to do the exact opposite of what a ‘normal’ insurer would do: ‘Most insurance companies look for a good mix of equities, bonds, gilts and so on that give them the best rate of return on investment. But our priority was to improve policyholder capital – that was much more important than making sure that future retirees got a 2% return on investment. So we sold most of our equity and focused on bonds and gilts.’

The next step was to try to ‘fix’ the deals that Equitable Life had been forced to commit to in order to survive its darkest days – Small calls this stage ‘regaining control of our destiny’. Outsourcing contracts were renegotiated, and the product portfolio was reviewed. ‘We still had almost £5bn of annuities on our books, which have a longer tail of life than with-profits policies. That was a disproportionate capital strain, so we sold the rest of our annuities to Canada Life.’

True to the management’s word, capital distribution rates to policyholders have increased steadily – to 12.5% in 2011 and 35% in 2015. The company has £7bn in assets today, compared with £35bn at its peak. But this has been about a lot more than meeting financial targets; running a shrinking business brings its own, considerable, management challenges too. There is a controlled, structured approach to removing work, adapting processes and cutting costs as the business shrinks – and that inevitably includes regular redundancies. It is testament to the success of the transition that productivity has doubled over the past five years as the company has shrunk.

In its heyday Equitable Life employed thousands of people; in 2011 it employed around 450 over four floors of its headquarters, and that has now reduced to 242 over two floors. ‘There’s no job for life here and people know it,’ Small says – but adds that that has never been a barrier to recruiting and retaining good people.

The management keep staff closely informed. ‘We have a strategy briefing every year to explain where we are on the cost programme and what that will probably mean over the coming 12 months in terms of redundancies,’ says Small. ‘And then we have monthly Q&As with the CEO and me, as well as team meetings and coffee mornings. We are very open.’

Redundancy terms are generous, which means that most redundancies are voluntary, and Equitable runs a strong learning and development programme for remaining staff: ‘We say here that we can’t guarantee employment but we can guarantee employability.’

Small’s previous role, overseeing the integration of Lloyds and HBOS, gave him good experience of dealing with cultural upheaval. ‘I had great pride in Lloyds,’ he says. ‘Banks are meant to be dull, and it was a good, solid bank. We all thought we were being heroic in taking on HBOS, but the next day we were villains. The industry as a whole made some huge mistakes, but for those of us in the back office it was a jolt. We were all determined to prove the takeover would work.’

For Small, his role at Equitable Life sums up the reasons why he wanted to become an accountant in the first place. ‘I can apply my business knowledge, and that was what they wanted here – someone who was more than a financial controller. They wanted someone who could help on the strategy and implementation side, and that has been the case.’

A history graduate, Small trained for the ACCA Qualification in his spare time while working for Hogg Robinson Travel. ‘It was simply because I started reading the Financial Times and found the language of business very interesting,’ he explains. ‘I was fascinated in how a business operates and – most importantly – how you can change it. I realised that as an accountant you could be a co-pilot in a business quite early on in your career.’

The ACCA Qualification, he says, was attractive because it allowed him to keep his options open.

Small is clearly a people person – he talks animatedly about the importance of behavioural economics in Equitable Life’s work. One of the society’s biggest remaining challenges, for instance, is managing the uncertainty risk over when policyholders will choose to take their money (a problem that has been exacerbated by the pension freedom and choice reforms that came into force in 2015). ‘We’re carrying out a big data exercise looking at that at the moment,’ he says, ‘using all the data we have to try to better understand what triggers people to cash in their policies.’

Equitable Life used to be a large organisation; today it is a medium-sized one. The transition is not just about slashing costs, it is about managing a business that is fundamentally changing over time. ‘The mindset here has to be “should we be doing that?”, rather than “we’ve always done it that way”,’ is how Small puts it. The usual rules just do not apply, as an experiment with automation (scuppered by Equitable’s non-standard contracts) recently showed. ‘With things like automation you need scale and a growing business to make it work, and we don’t have that,’ Small says. So Equitable Life will continue, until the end, to do things in its own way.

"We all thought we were being heroic in taking on HBOS, but the next day we were villains. For those of us in the back office, it was a jolt"

‘I say to our graduates that if you want to stand out in finance, you need to be good at people management and at the commercial aspects of business.’

‘Winning hearts and minds is essential. I can’t pass a stage without wanting to stand on it and talk. I want to communicate what we’re doing and why.’

‘The mindset has to be “should we be doing that?” rather than “we’ve always done it that way”.’

‘With things like automation you need scale and a growing business to make it work.’