Máirtín Ó Muilleoir, the new NI finance minister – and Sinn Féin’s first ever – explains the big Brexit vote challenge as well as his take on tax policy and economic development 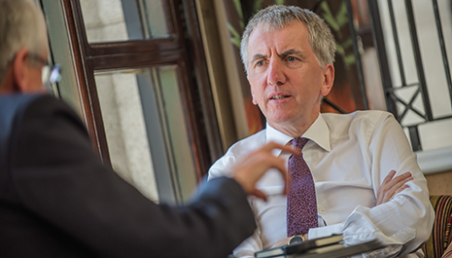 This article was first published in the September 2016 Ireland edition of Accounting and Business magazine.

Máirtín Ó Muilleoir, Northern Ireland’s new finance minister, is tall, thin, charming and seemingly addicted to social media (Twitter, especially). He also gives the impression of being his own man. As we sit over a coffee and tea in Belfast’s Europa Hotel, he is – almost uniquely for an interview with a member of the Northern Ireland Executive – without any civil service minders.

Ó Muilleoir is a different type of politician in other ways too. He gained warm approval for his notably inclusive approach as Belfast’s Lord Mayor in 2013. As a result, almost everyone in the North’s capital city seems to know him. And he has led a large, successful company – the Belfast Media Group, whose titles include the New York-based Irish Echo.

But does a business career give him the right skills when it comes to being finance minister? ‘That is for others to judge,’ he says. ‘I am certainly no stranger to the demands of budgets; of wanting to see fast delivery, efficiency and the building up of communities; of being aware of the importance and dignity of employment, and the curse of idleness.

‘Some of that came from business. It’s probably more important that I am the son of a sheet metal worker and a maths teacher, a mother who raised seven children. Background is important.’ What is also important, he adds, is values. He praises local businesses that demonstrate loyalty and commitment to their staff.

Perhaps the most significant thing about Ó Muilleoir’s appointment is that he is Sinn Féin’s first ever finance minister. His appointment presumably represents a signal from Sinn Féin – perhaps to the South even more than to the North? ‘I don’t tend to speak for the party,’ is his careful response, but he adds: ‘It sends out a message that we can do government and that we have our own agenda and theme, which will go right across ministries. I think that is very relevant, especially to a Southern audience. The second message is that after all the years of conflict to say to the unionist community that we can govern fairly.’

He cites a recent meeting with business organisations, where there were varying degrees of engagement with him. ‘There was no doubt in my mind that people south of the border were more challenged by sitting down with Sinn Féin than were the representatives of the CBI [from Northern Ireland]. There is a challenge for all of us.’

But nothing is more challenging at present than Brexit, especially for the region – Northern Ireland – likely to be most affected. ‘If you want to be finance minister, then this is the time to be finance minister,’ he says. ‘It’s like qualifying for the World Cup,’ he jokes, before becoming rigidly serious. ‘It’s a calamity. As a political representative, as a community leader, my intention is to prevent Brexit, to ensure the mandate here to remain is respected. That has to be your starting point.

‘Within government we have this dilemma and challenge,’ he adds. Because while Sinn Féin campaigned to remain in the EU, its coalition partner, the DUP, campaigned for leave. This follows what Ó Muilleoir describes as ‘probably the best period of relations in government in 10 years’. A tense and distrustful five-party coalition was replaced after this year’s Assembly elections by a voluntary coalition of the two largest parties (plus one independent, as justice minister).

Ó Muilleoir says the ‘metaphorical hand grenade of Brexit’ has ‘disrupted our relationship’, leaving a ‘split in government’.
He asks rhetorically: ‘How do we find some common ground on this, so that we don’t let the differences on Brexit tear our government apart? The common ground is that most people recognise that Brexit is a calamity for us. Secondly, it is essential to recognise that most people here voted to remain.’

Ó Muilleoir is certain that the Brexit outlook is negative. ‘The downturn has started,’ he says, speaking three weeks after the result. Property deals in Belfast have stalled, there is ‘paralysis among decision-makers’, young adults from other EU countries are changing their minds about studying in Northern Ireland and universities are losing research funding. He is particularly exercised by the potential impact on tourism revenues, including the likely loss of major conferences in Belfast, where the city council has just opened a £30m convention centre.

There is also the matter of whether the UK government will replace the EU’s financial support for Northern Ireland. ‘The only thing we can be sure of,’ says Ó Muilleoir, ‘is what the government says. The prime minister, Theresa May, told the Welsh first minister that she would not guarantee the continued payment of EU funds post-Brexit, if Brexit happens. Theresa Villiers, when she was secretary of state, refused to confirm that she would replace the £266m agricultural money. There is no guarantee.’

But, he argues, ‘the crux’ for Sinn Féin is that it cannot allow economic damage to be inflicted, sitting back, ‘saying we told you so’. He explains: ‘That is not an option for us. As finance minister I want to make a difference. I did not come into government to stand by while Brexit or anything else undermines our progress. In fact, some of us are hoping to see a sea-change in the social and economic welfare of our people, and that has to remain the mission.’

Budgetary planning is now more difficult and Ó Muilleoir is minded to produce only a single-year budget, at least until there is clarity from the UK’s new chancellor of the exchequer’s Autumn statement on fiscal policy and the size of Northern Ireland’s block grant. Ó Muilleoir hopes that the new incumbent, Philip Hammond, will bring a new economic policy. Deficit reduction has cut the Northern Ireland Executive budget painfully and, Ó Muilleoir argues, caused suffering to the very areas of England such as Sunderland and Walsall that voted to leave the EU.

Northern Ireland’s budgets are set for a further squeeze with a cut to the North’s corporation tax to 12.5% from April 2018. Westminster’s block grant to the region will be reduced to pay for this – the latest estimate for which is a hit of £270m a year. But the response of the outgoing chancellor, George Osborne, to the Brexit vote was to propose a reduction in the UK’s corporation tax rate to less than 15%.

Ó Muilleoir doubts if Hammond will carry this out. Without clarity on the UK’s decision on tax rates, it becomes impossible for Northern Ireland to negotiate on its rate and the cost of a cut, he says.

But Ó Muilleoir remains committed to the rate cut. ‘If you go back to the original decision that Sinn Féin and the Executive had that we want 12.5%, we want to control it, we want it to be affordable, we want to have a deal with the Treasury that is fair and appropriate,’ he says. ‘So is it still the case that we want to the corporation tax power? I think it is, and I think it will make a difference. We are doing it to create thousands of new jobs.

‘I do believe that part of the foreign direct investment success of our friends across the border has been the corporation tax levels. It is not an accident that 10 out of 10 of the world’s top internet companies are south of the border, and in terms of life sciences it is nine out of 12, and for pharma companies it is 10 out of 13. I am not saying that is the only thing. But it is part of the reason for FDI performance in the South. The two game-changers from my point of view are the corporation tax rate and the all-island economy.’

If the UK does cut corporation tax to 15% or even 14%, there are expectations that some in the DUP will argue that Northern Ireland should bring its rate down to 10% to gain a competitive advantage over both Great Britain and the Republic of Ireland. Ó Muilleoir implies that Sinn Féin would reject this. ‘Michael Noonan [the finance minister in the South] put it well: he didn’t see the South cutting its rate no matter what Britain did. We don’t want to get into a race to the bottom. Let’s be clear what our objectives were: to equalise the tax rate on the island and to create thousands of jobs – and to take more powers from London.’

Ó Muilleoir believes that cuts may not be needed to cope with the reduction in block grant. ‘I wouldn’t give up the prospect of the pie growing,’ he says. Ó Muilleoir hopes that it will quickly grow tax revenues – business rates, as well as corporation tax – as new investment is attracted. ‘I know that our modelling says it will take some years before that starts happening, but that has to be our objective.’

Paradoxically, the finance minister talks of creating new government jobs, even while his department is overseeing cuts, with 12 government departments shrinking to nine and a programme of voluntary redundancies eliminating 3,000 jobs in the past year. But Ó Muilleoir says he would like government to boost tourism by employing people to support innovation in the sector. It is one of many areas where the finance minister wants to alter the way things are done.

‘The opportunity is absolutely immense,’ he says. ‘The amount of scope for doing things is breathtaking: trying to take a fresh look at what we are doing, trying to make it a government that serves people, serving some of the people who weren’t served previously, better – and I am talking about Protestants and Catholics. One of the great challenges after the Belfast [Good Friday] Agreement was that it was not just working-class Catholic areas that were left behind, but also Protestant areas.

‘There is a common purpose in government that was not there previously. You need to tread cautiously. I think in European terms this is unique: I am not sure there are other coalitions where the two parties are diametrically opposed on the most burning issue of the day. But I do think that finance is the nexus, it is right at the centre, right at the heart. It is my opportunity to convince people that if they work closely with me there is a benefit. I have seen that, with people saying they have never seen that before. We need to see changes.’

"I did not come into government to stand by while Brexit or anything else undermines our progress."