Drones are taking off in the business world, with tax professionals using the technology to check on assets and valuations 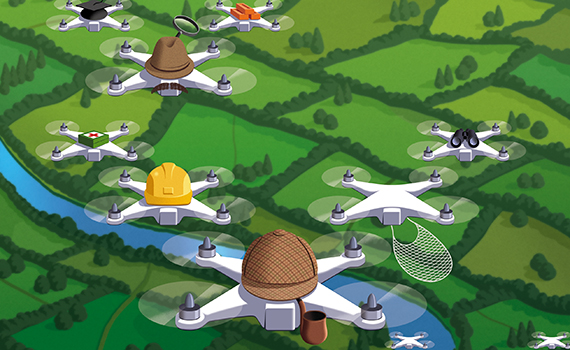 This article was first published in the July/August 2017 Ireland edition of Accounting and Business magazine.

Drones may still sound a little like science fiction, but their use is rapidly becoming mainstream. The practical applications of drones are multiplying - from energy generation to the protection of birds of prey. While much of the reporting of drone technology has focused on how retailers may use drones to deliver parcels, such applications are still at the trial stage. But for accountants - auditors especially - drones are relevant and usable right now.

‘Drones are becoming a valuable tool for professional accountants by enhancing their capabilities to accurately calculate the numbers of assets, evaluate their condition, as well as improve managerial risk accounting,’ explains Magdalena Czernicka, a manager at PwC’s drone-powered solutions division in Poland. A PwC study reports that drones - or unmanned autonomous vehicles (UAVs), as they are more precisely called - have the potential to radically reshape much of modern commerce, and values the emerging global market for commercial drone applications at US$127bn.

‘Data gathered by UAVs can also be applied for due diligence purposes in order to minimise the risk of fraud or concealment of the actual state of assets,’ says Czernicka. ‘UAVs are currently used by tax offices in countries all around the globe - Spain, Indonesia, Hungary, Argentina, Nepal, China - to inspect the correctness of tax returns or catch smugglers. It is worth mentioning that data capture from drones can be used as evidence in litigation as well as to properly value assets during insurance processes.’

Those tax inspections are often looking to determine whether property owners have correctly valued their homes for the purposes of property taxation. In some jurisdictions taxes can go up if a swimming pool is built - but owners do not always declare them. Drones are a simple way for tax inspectors to check the truth. In Buenos Aires, tax inspectors have used drones to identify 100 swimming pools and 200 luxury mansions that had not been properly declared, resulting in a significant increase in local tax collection.

PwC predicts that the largest commercial application for drone technology will be in infrastructure, with an estimated global market value of US$45.2bn. Ciarán Kelly, advisory leader at PwC Ireland, explains: ‘Drones and the data they provide are a game-changer over the entire lifecycle of a transport infrastructure investment. Provision of real-time, accurate and comparable 3D modelling data is crucial during the preconstruction, construction and operational phases of an investment project, and all this data can be acquired by intelligent and cost-effective drone-powered solutions.’

Research by Deloitte has found that investment rates in the drone sector are increasing exponentially, with venture capital financing of software-based drone startups exceeding US$335m last year, which was double the level of 2015. Deloitte’s EMEA Maximo centre of excellence is based in Dublin, and supports clients in 28 countries using the IBM Maximo asset management system. Its director Nigel Sylvester says that while drone technology itself is mature, what is new is its integration with other technologies, such as automation, cloud computing, cognitive learning and the internet of things. This technological integration has taken drone application a long way in a short period of time.

One company benefiting Deloitte’s expertise is wind farm operator Energia, which deploys drones to improve the efficiency of its wind turbine inspections ten-fold. Sylvester explains: ‘A very big driver is health and safety. Asset inspections in many environments carry health and safety risk. You have to work at height inspecting wind turbines, and there is the risk of “ice throw” [the far-flung splattering of ice build-up on the turbine blades]. Drone use removes the need for manual inspections to be undertaken in that environment.’

Other asset inspection and operational maintenance applications that Deloitte’s Maximo is engaged with include oil and gas pipelines and rooftop inspections. This use of drones not only directly cuts clients’ costs, but also improves the quality of their asset management and so positively impacts their bottom line.

Deloitte points out that vastly enhanced software is also extending the ways in which drones can be relied on. New software can interpret data provided by drones better; it can, for example, recognise cars and people, count individual plants in a field, and identify metal corrosion of infrastructure. The need for human participation in the analysis of drone-provided information is reducing.

Drones are now commonly used for safety risk assessments at construction sites and to inspect the condition of pipelines in regions where it can be very difficult or expensive to undertake a physical check. The technology can also be extremely useful for asset valuations – for example, in due diligence exercises and in the preparation of legal proceedings. RICS (the Royal Institution of Chartered Surveyors) reports a big increase in the use of drones by commercial surveyors, including for the valuation of agricultural land.

PwC’s Polish division operates a commercial surveyor drone service. It was used by Polish State Railways to monitor the construction of a railway bridge that was part of a high-speed network between Warsaw and Katowice. The drone-generated information was supported by data analytics to provide visual updates on progress that the client could track on smartphones.

Another PwC-supported construction project achieved savings of US$2.94m in claims settlement litigation, because of the quality of the drone-provided evidence. A study by the firm found that the number of life-threatening accidents on construction sites monitored by drones has been cut by as much as 91%.

Ireland has established itself as a leader in the development of drone technology, with about 60 commercial drone companies currently operating in the country. One of the oldest is Versadrones, which is based in Skibbereen, County Cork, and designs and manufactures drones. Its founder Tomasz Firek says that the most common commercial drone uses are videography (the capture of moving images on electronic media) and orthophotography (an aerial image that is geometrically corrected so that the scale is uniform and which can be used to measure true distances). Versadrones’ clients’ applications include search and rescue, security, 3D mapping and the surveying of agricultural land.

Firek concedes that drones are not universally popular. ‘When I developed the drones about eight or nine years ago as one of the first three companies in the world, people had no idea that this technology would invade so far into their privacy,’ he says.

Deloitte meanwhile has warned companies deploying drones to ensure they take adequate cybersecurity steps to protect their data and systems.

It is also essential to recognise that the use of drones is regulated - in Ireland by the Irish Aviation Authority. All drones that weigh more than 1kg must be registered with the authority, which also controls their use. In addition, there are strict regulations about the use of private information and breaches of privacy, which are subject to regulation by the Data Protection Commissioner.

Even with this strict regulation, though, it seems inevitable that accountants will find that drone technology is an increasingly important part of their professional life.

Drones have far more applications that merely being ‘eyes in the sky’. For example, there are drones that can operate as tethered kites in order to harvest high-level wind power and convert it into electricity. Ireland is at the forefront of applying this particular technology. Dutch company Ampyx Power is working with energy company E.ON to commercialise a product, using a site in County Mayo as a testbed. The theoretical advantages of electricity production this way are the lower costs and higher generation capacity of airborne wind technology.

‘Airborne wind supports one of our overall targets – to drive down cost for renewable energy,’ explains Anja-Isabel Dotzenrath, chief executive of E.ON’s climate and renewables division. ‘In addition to making airborne wind competitive with conventional wind power, we would like to work with authorities and legislators to pave the way for introducing this exciting technology and eventually make it eligible to participate in tendering processes [for renewable energy subsidies].’

The Ampyx AP-3 model will be trialled in Mayo from late 2018. It will be a 350kg drone with a 12m wingspan, generating 250kW of electricity, operating 24 hours a day, seven days a week, with fully automated responses to wind drop or system failure to bring it safely back to earth on its small landing platform. Once fully developed, it should be able to withstand extreme weather events.