The sky's the limit for the aircraft leasing sector

Ireland has taken off as a global centre for aviation leasing, and the future course for the industry looks promising, with attractive opportunities for accounting professionals 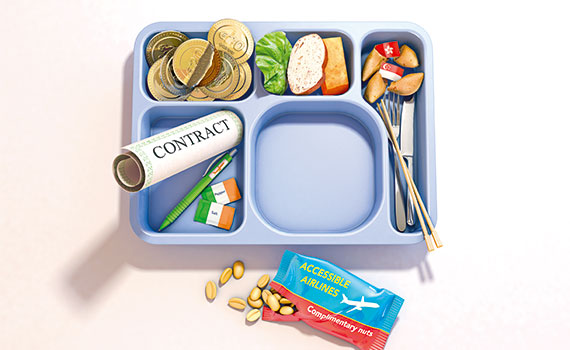 Ireland is a major global player in the fast-growing, internationally focused aircraft leasing industry. A recent PwC study found that, excluding its tax contribution, the sector brings in an estimated US$660m (€541m) to the Irish economy and supports almost 5,000 direct and indirect jobs.

‘What is clear is that the industry has real presence and tangible substance in Ireland. This is a key differentiator when compared to other leasing hubs,’ the PwC report declares.

CSO figures published in February 2018 also highlight growth, showing that the stock of leased aircraft (tangible fixed assets) increased from €27.4bn in 2007 to €77.5bn in 2014, with the largest growth, over €30bn (65%), recorded in 2014 following the arrival of new entrants in the sector.

Such is the scale of the industry that the Central Bank’s quarterly bulletin noted last year that industry-specific developments have the capacity to impact Irish official statistics. In terms of tax contribution, an initial analysis of 2017 corporation tax receipts shows the sector brought in around €40m, Finance Minister Paschal Donohoe said recently in response to a question by Deputy Michael McGrath.

Ireland’s success as a global aircraft leasing hub has been given a helping hand by a heritage which dates back to the foundation of commercial aircraft sales and leasing company Guinness Peat Aviation (GPA) in 1975. Skills and talent nurtured in GPA exert influence down to the present day, while the specialist expertise developed by professional services firms to support aircraft leasing continue to be a competitive advantage for Ireland.

All of the large accountancy firms have specialist aviation knowledge and provide access to a pool of non-executive directors alongside audit, advisory and tax services.

BDO tax director Angela Fleming says: ‘As the aviation finance industry is such a key industry for Ireland, all of our treaties have been negotiated specifically with this sector in mind. Our treaties therefore offer low – or in many cases zero – withholding tax rates on lease rental income into Ireland.’

However, Fleming cautions that competitive tax regimes in jurisdictions such as Hong Kong and Singapore are an emerging threat for Ireland. She says: ‘Last year, Hong Kong introduced a dedicated tax regime for aircraft lessors. The tax package consists a special concessionary tax rate of 8.25%, with lessors taxed on 20% of the gross rental income, less certain expenses. This special regime, coupled with a lower withholding tax rate on lease rentals from Chinese airlines, puts Hong Kong at a competitive advantage to Ireland.’

Citing the recent lease of a Boeing 787-9 Dreamliner to Korean Airlines under the new Hong Kong tax regime, Fleming says Ireland will have to remain vigilant to protect its position as the favoured jurisdiction for aircraft lessors.

Other headwinds for the sector include interest rates, fuel prices and operating costs all on the rise, according to Tom Woods, KPMG’s head of aviation finance. ‘That said, where costs are rising due to a strong and growing global economy, they are not necessarily problematic, as with them comes inflation, which will help the residual values of aircraft,’ he adds.

A 2018 KPMG study found aircraft lessors ‘bullish’ about global demand for aircraft and the relative health of airlines around the world. It points out that the air transport sector has doubled in size every 15 years and is set to continue to expand, potentially at an even faster rate.

Woods says: ‘Passenger traffic, measured in revenue passenger kilometres, grew at 7.5% in 2017 and is expected to grow by 6% in 2018. This is above the 10 to 20-year long-term growth trend of 5.5%, which suggests the industry should double within the next 15 years. Importantly, the average load factor is pushing up to record levels – above 81%. Capacity is being managed and lags demand. Passenger numbers are expected to increase to 4.3 billion in 2018, with International Air Transport Association airlines expected to post record profitability of US$38.4bn in 2018. This is driving a strong demand for both new and used aircraft.’

Woods adds that capital and banking markets remain very open, with more investors and institutions entering the sector in the search for attractive and stable returns, and enhancing liquidity. ‘Pricing of transactions has become incredibly tight, indicating a maturing of the sector and the level of competition in the market,’ he says. ‘The expected increase in interest rates may see some investors leave this market, but due to the extent of investor appetite, this is not expected to create liquidity issues.’

As for consolidation, Woods says the change in the interest rate environment may present opportunities for M&A, particularly where overleveraged investors need to sell down portfolios or are looking to divest entirely.

Richard Goggin, senior recruitment manager with recruitment consultancy The Panel, says intense competition among lessors for the best talent in the market is driving salaries upwards.

Accountants entering the industry are usually recruited from the larger firms, moving initially into areas such as internal audit or financial reporting where they acquire sector-specific knowledge which then helps them progress into more commercial roles in areas such as pricing and FP&A (financial planning and analysis).

According to Goggin, recently qualified accountants can expect a starting basic salary of around €55k-€60k. Those with three years’ post-qualification experience earn on average around €75k. Bonuses also tend to be stronger than in other sectors, typically around 15-20%.

‘In general we see a lot of movement at two to three years’ PQE,’ Goggin says. ‘Accountants who join aircraft leasing firms out of practice in internal audit or financial reporting roles tend to progress to commercial roles in FP&A, pricing, trading and marketing.’

Brexit is not expected to have much impact on aircraft leasing in Ireland, according to PwC tax director Joe Conboy. He says: ‘Any increased customs or importation costs that may apply to aircraft are typically borne by the lessee, so it will be the UK-based airlines who will ultimately need to manage this risk. To the extent that Brexit results in a more challenging regulatory and/or trading environment for UK-based airlines, which may well be the case, the global nature of the aviation leasing industry means that lessors have the ability to place their aircraft in alternative geographical markets if necessary.’

Something that will be keeping accountants and finance teams busy, however, is IFRS 16, the new leases standard, effective for annual periods beginning on or after 1 January 2019.

‘The industry consensus suggests IFRS 16 will have a notable impact from an operational, reporting, and implementation perspective,’ says Deloitte partner Brian O’Callaghan. He adds that it will have more impact on airlines than on their financing partners. ‘Substantial new assets and liabilities will appear on airline balance sheets, while reported profit and performance measures will be impacted,’ he says. ‘For individual airlines, the impact will depend on their financing and leasing structures. It also remains to be seen how the market will approach IFRS 16 key judgment areas, and how potential currency volatility will be managed or hedged.’

Whether IFRS 16 will affect aviation leasing volumes remains to be seen. Overall, though, the prospects for the sector appear benign for now as long as Ireland remains an attractive and efficient location for lessors.

"What is clear is that the aircraft leasing industry has real presence and tangible substance in Ireland, unlike other leasing hubs"

Win your wings: the master’s market

Experienced support services have developed in tandem with the growth of aircraft leasing in Ireland, including specialised accounting and finance professionals, tax advisers and legal service providers.

With further expansion in the aviation leasing sector expected, Ireland’s ability to provide access to highly skilled talent will continue to be important.

PwC research shows that the skill in most demand is contract and lease management, followed by marketing and commercial knowledge, legal expertise, pricing, financial analysis, technical, accounting and tax. Credit risk skills are also prized, although to a lesser extent.

PwC says that to safeguard Ireland’s position and ensure an ongoing stream of qualified industry personnel, more educational programmes are needed. Its research indicates that Ireland is well placed to become a world leader in meeting the educational needs of the industry.

Master’s programmes currently offered in Ireland include an MSc in aviation finance at University College Dublin’s Smurfit Business School, an MBA with specialist aviation management electives at the University of Limerick, and an MSc in management (aviation leadership) at DCU. The UCD programme, which the aviation leasing industry has contributed to, is currently the only master’s qualification for aviation finance in Europe.