After building a career at household-name companies, Jonathan Blanchard FCCA is fitting nicely into his role as CFO and COO at luxury fashion retailer Reiss 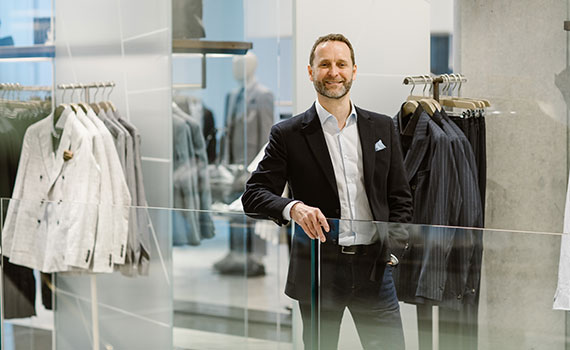 Jonathan Blanchard’s role as CFO and COO of Reiss seems as perfectly tailored for him as the affordable luxury fashion the company sells. Only a few months into the role he is part of a new team that is determined to put the company back on a strong growth path.

Founded in 1971 by David Reiss, who ran the eponymous business until selling it in 2016 to private equity investor Warburg Pincus, the fashion retailer has moved from a single store selling men’s suits in Bishopsgate, London, to a global brand.

‘I love retail and I love the brand,’ says Blanchard. ‘Even before I received the call, Reiss was a large part of my wardrobe.’ After two minutes in the room with recently appointed CEO Christos Angelides, Blanchard knew he wanted the role.

An experienced private equity and turnaround CFO, Blanchard says he looks for three elements in any role: the business must excite him, the role must challenge him, and the CEO must be right because ‘as CFO/COO, I expect to work closely with the CEO, having a strong partnership to drive the business forward’.

His track record is as a commercial finance director who has always had a broad remit, and his role at Reiss is no exception. Functions under his control include finance, property, IT and logistics, and he has an extensive involvement in areas such as e-commerce. ‘My primary role is to support the business, driving performance and helping growth,’ he says.

Blanchard has many balls to keep in the air, with demands coming in from many different directions simultaneously. For instance, AB saw Blanchard in the week the Beast from the East landed in the UK, so budgeted numbers were inevitably missed; at the same time, Reiss launched its first three concessions in South Korea.

So immaculate planning of the diary is tough; perhaps it is no surprise he is an inveterate list-maker, adding to it at any point of day or night on his iPad or iPhone. And there an item will stay until sorted, even if that takes time.

As it is early days, Blanchard is still on a learning curve, analysing issues and working out priorities. For instance, he and his colleagues have just completed a new four-year business plan – a big piece of work involving the entire senior management team, with Blanchard coordinating the process as well as challenging the assumptions behind the plan, although ‘with the CEO, I’m confident the plan is good and assumptions sensible’.

Blanchard says that one lesson he has learnt over his career is that every business needs to develop resilience. ‘In any business, things are going to go wrong, and especially in retail,’ he explains. ‘You can’t allow these setbacks to knock you and your confidence.’ And resilience for Blanchard is personal as well as corporate. ‘Strong leadership, sound management, good processes and operations that don’t crack are fundamental to a business.’

Before joining Reiss, he went shopping at the flagship store just off London’s Oxford Street. He says he found the customer service at the shop, which abuts a lively head office, was every bit as good as the brand’s tailoring.

When he joined the business, he said his first task was to listen. ‘You need to listen properly to everyone in the business to understand what is going on and what the real issues are.’ Following the listening phase, Blanchard is ready to make changes quickly in response to changing circumstances. For example, Reiss has a considerable property portfolio, and Blanchard has made some efficiency and cost savings with the help of advisers. ‘Those changes were clearly the right thing to do; it brings benefit to the company and it breeds confidence in my team, as I tell them our role is to make the business better, and you only make things better by making change.’

Empowering his team is important. If they want to drive change, Blanchard says he will fully support them in proposing innovations in areas where they identify inefficiencies. And he’s prepared to take the concomitant risk that if it goes wrong then it could – for a while – be worse than before, although he adds: ‘I’ve never really had that fear.’

All retailers will have to change if they want to improve performance in what Blanchard calls costs headwinds (a challenging mixture of rent, rates and pay increases) as well as the ongoing opportunity from digital as more customers shop online. Reiss is wedded to strategic investments in online and a physical presence on the high street. ‘It is about how stores and online interact with one another,’ he says.

Looking at the issues for the sector, Blanchard declares: ‘Retail isn’t dead, but boring retail is.’ He shies away from defining the Reiss customer profile too closely: customers could be frequent shoppers or buying for a special occasion – a dress for a wedding, for example. Given the price tags, though, they are mostly over-25s.

Reiss has always prided itself on its reputation for design – all done in-house – and Blanchard is aware of the ‘effort and love’ that has gone into all the fashion the company sells.

In terms of the numbers Blanchard is clear on the three main KPIs for the business (and for all retail): sales, gross margin and EBITDA as a profit measure. ‘Retail analyses its sales every day, spotting trends, seeing what is performing well, and then backing those trends by making sure we have the stock available.’ Systems are such that Blanchard could have sales figures hourly, but he says that function is firmly turned off.

He says his satisfaction comes from helping a business to grow and delivering value to shareholders. His experience tells him that all employees are energised by the business performing well. Reiss may have the advantages of a well-established brand, but Blanchard and his colleagues know they have to turn their advantage into bigger profits.

When Warburg Pincus acquired the chain in 2016, it made it clear that it was looking for expansion in the UK as well as internationally, in North America, Asia and Australia.

Blanchard is well aware of the task ahead: ‘While in the last couple of years the business has grown, the profits have not. Now we have a new management team in place, and with the brand’s strength we see 2018 and beyond as a period we move back into profit growth.’

As Reiss looks to improve performance over the next few years, it has declared its brand attributes to be ‘modern, creative, cool, stylish.’ As Blanchard settles into the CFO/COO role he looks set to become the embodiment of that tag line.

"I love retail and I love the brand. Even before I received the call, Reiss was a large part of my wardrobe"

‘Constantly challenge yourself to improve your performance and progress your career.’

‘If your performance isn’t improving, try to change your role at that business. If you can’t do that, think about moving elsewhere.’

‘Be demanding of your line manager to be exposed to new areas and build your experience.’

‘In a turnaround you focus on the key issues holding the business back and improve them. In any role you need drive, energy and resilience – but in turnaround you need those characteristics in bucket loads.’