By joining the project team from the start, finance professionals can be the super-connector, helping to close the widening global infrastructure gap 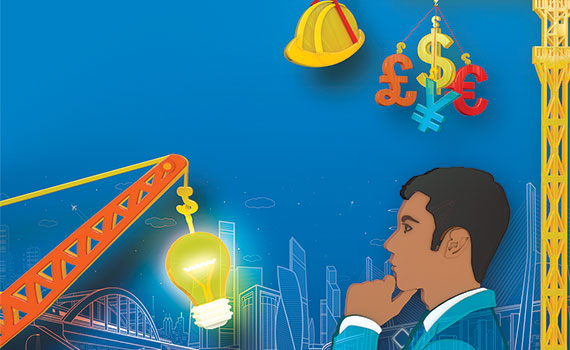 Could finance professionals be the key to filling a potential US$14 trillion global infrastructure gap set to appear by 2040? That is the premise of a recent joint research project from ACCA CPA Canada.

The report, How accountants can bridge the global infrastructure gap, argues that finance professionals are best equipped not only to measure the gap – and there are a number of ways to do that – but also to reduce it so that everybody can enjoy the benefits of a well-planned, well-designed and well-built infrastructure system, wherever in the world they are.

Often described as the plumbing that makes economies and societies work, infrastructure provides the foundations on which entrepreneurs can build their businesses and people can live their lives. Where would we be without road and rail networks, without energy and water supplies, without means of communication? But equally, where could we be if all these areas, and more, provided better, more reliable and more easily accessed services and support?

This insight is the driving force behind the report, which defines and investigates the infrastructure gap, analyses the causes behind the gap, and then sets out a way forward, one in which the finance professional will be key.

In the first approach, the infrastructure investment gap is the difference between what is actually spent on infrastructure and an aspirational target that governments would like to spend to improve infrastructure in their country. The smaller the gap, the better the performance, runs the argument.

In the second approach, the infrastructure service gap focuses on what a country aims to achieve through the development and maintenance of its infrastructure. It moves away from a notional investment figure and looks at needs instead.

It is more qualitative – and therefore subjective – approach.

‘Finance professionals are well placed to not just measure these gaps but also provide a discipline throughout the life of an infrastructure project so that the gaps can be reduced,’ says Alex Metcalfe, the author of the report.

The report highlights major barriers to meeting service needs and reducing the investment gap. The big barriers identified by ACCA and CPA Canada members (see graph below) include lack of political leadership (52%), lack of finance or funding (49%), and planning and regulatory barriers (40%).

A lack of political leadership affects a country’s ability to select projects, a lack of finance and funding clearly impedes the effective financing of projects, and planning and regulatory barriers speak to the interface between the public and private sector in the delivery of infrastructure. The report argues that finance professionals can play a vital role in breaking down each of these barriers.

The survey reveals regional variations, although the underlying themes remain the same. For example, corruption is seen as a particularly serious challenge in South Asia, Africa, Central and Eastern Europe, and the Caribbean, but was cited by 10% or fewer of respondents in North America and Western Europe. In comparison, a lack of political leadership ranks consistently high as a barrier across the world.

Yet the research found that all too often the finance professional is the missing member of the infrastructure project team. In too many cases, the harm has been done before the accountant is brought in.

‘By involving finance professionals from the very beginning, costly mistakes can be avoided,’ says Metcalfe. ‘This means asking the finance professional to provide the necessary discipline even before a project has been selected. Accountants can put numbers on ideas and concepts, by applying a consistent methodology to ensure they are evaluated against other options for meeting policy goals.’

Once a project has been selected, accountants can then cast a critical eye over the financing options, ensuring financial sustainability and viability, and taking a holistic, total lifecycle view of the project. And when it comes to the delivery phase, accountants are well placed to provide the crucial financial oversight to ensure that the project is successfully commissioned.

CPA Canada and ACCA tested these views with a series of roundtable discussions across seven countries –  Canada, Jamaica, Malaysia, Nigeria, Sri Lanka, Trinidad and Tobago, and and the UK. The discussions helped in the formulation of an action plan to ensure finance professionals do not remain the missing member of the infrastructure team, but play a central and vital role. The plan sets out the following key steps to promote the inclusion of finance professionals on the infrastructure team:

Get these steps right, and the finance professional will be in a perfect position to help reduce that US$14 trillion infrastructure gap. Fail to do so, and that gap could very easily stretch even wider.

The infrastructure gap in Africa

Foreign direct investment is a key driver for infrastructure projects in Africa, but finance professionals still need to provide appropriate levels of due diligence to ensure success.

Comparing African results with global benchmarks suggests the perceived service quality of African infrastructure is well below that of global peers.