The tax implications for digital nomads and their employers

With technology allowing an increasingly mobile population to work from seemingly anywhere, what are the tax implications for these digital nomads and their employers? 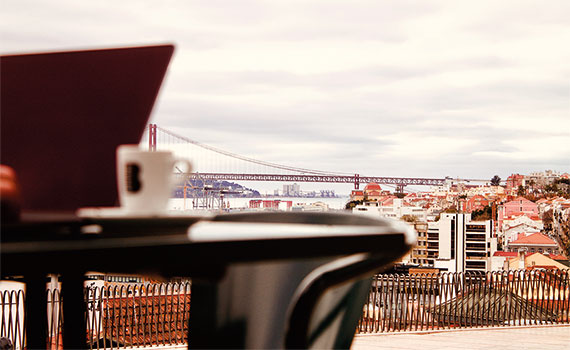 Press reports have recently highlighted the impact on local economies of digital nomads – entrepreneurs of apparently no fixed abode who travel the world in search of a decent flat white and a super-fast internet connection. While no doubt adding to the vibrancy and diversity of many thriving business enclaves, they have also been criticised for inadvertently pushing up the cost of living and forcing out the less mobile local population.

These digital nomads are able to make a living by working anywhere in the world, carrying out their business online without geographic boundaries. Portugal’s capital Lisbon is just one city that in recent years has seen an influx of this footloose tribe, and a subsequent increase in rents and café culture.

It’s not an ideal scenario, and constitutes a headache for local planners and politicians. However, these individuals will be spending their euros, and perhaps to a lesser extent their cryptocurrencies, in the local economy, and through local sales taxes they will be adding to the national coffers.

But more broadly, how are these workers taxed and how do governments ensure they are contributing their fair share? Indeed, are they contributing anything at all, or are these global citizens so mobile that they are able to avoid the tax system altogether?

The short answer is no. They will be required to pay tax somewhere depending on residency rules (Portugal, for example, operates a ‘183 days in 12 months’ rule – see box), either in the form of income tax or of corporate tax if they set up to work within a corporate structure.

However, it really depends on where the individual has habitually lived, whether the country concerned has a tax treaty with the country where they are working, whether they are self-employed or doing a series of short-term employments, and how long the engagement continues.

The tax and reporting issues can also depend on where they are performing duties, and there are many social security and labour law considerations that could come into play, again depending on the country concerned. So if one were to ask what a Polish self-employed person living in Portugal working for a Swiss company running a website in Hungary would pay in tax, the answer is never going to be straightforward.

‘The rule of thumb in this situation for income tax and social security would be that an individual would pay tax and social security where they work,’ says Richard Harryman, tax director at PwC. ‘This works well in a straightforward situation where the individual is based in the same country that they are employed or engaged in. For a remote worker, like the one in this example who lives and works in Portugal, paying tax where they live and work would arguably be the “fairest” option, given that most societies would expect someone living in that country to make a contribution.’

As Harryman says: ‘For companies dealing with this type of worker, the key to managing the engagement is good data on areas such as role, structure, employee location and travel; an understanding of the compliance rules and where there are mismatches; and a technology-enabled process that supports compliance.’

On the self-employed versus employed position, this often has a significant impact on the tax and social security position of the individual, as well as implications for the tax and legal obligations for the company engaging them. Many countries have anti-avoidance tax legislation similar to the UK’s IR35 rules that can deem an individual to be employed regardless of the contractual situation on paper. In a remote worker situation, there is the added challenge of a potential mismatch in the way different countries think the individual should be treated.

For individuals who are employees or who are deemed to be employed, most countries require that the employer operates tax withholding. With remote workers, the company may not have a corporate presence in the country in which the remote workers are based. In some countries this can lead to the company needing to register with the local tax authorities in order to operate tax withholding, or the individual signing up to some form of direct collection arrangement.

Most multinational companies have been aware for some time of the risks involved in an individual working in one country on behalf of an engaging company based in another. Depending on the precise nature of what that individual is doing, corporate tax filings can be triggered by a remote working arrangement.

Andy Kelly, global expatriate tax services partner at BDO, says the golden rule for employers is not to agree to an overseas flexible work arrangement until the tax implications have been fully considered. ‘Even where the individual is engaged via a personal service company or a consultancy agreement, there’s no guarantee that the relevant tax authorities will not consider that the individual should be taxed and subject to social security as an employee with accompanying employer liabilities and obligations,’ he says.

Portugal operates a ‘183 days in 12 months’ residency test, so if the individual lives in the country for longer, they are deemed to be resident. However, even if deemed to be a Portuguese resident, then the country’s special ‘non-habitual residence’ rules – designed to attract ‘high value’ industries and individuals as well as pensioners – could give a tax holiday for the first 10 years living in the country.

This takes the form of a flat 20% income tax rate (usually up to 48%) for workers in ‘high value-added’ scientific, artistic or technical professions, including IT workers. But, as always, expert advice should be sought before packing the laptop and surfboard.