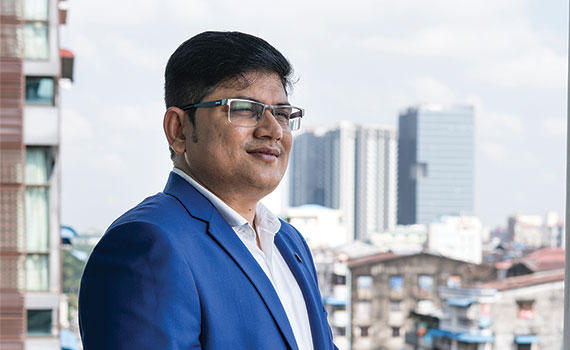 At the same time the country has been undergoing a major economic transition, which has witnessed acceleration in growth assisted by increased gas production and exports. Economic growth is projected to continue despite political change and natural disasters; in particular, major flooding in 2015 decreased the supply of commodities, while low commodity prices and slowing foreign investment, contributed to widening the current account and fiscal deficit, according to the World Bank.

Despite these setbacks, the economy is expanding: the World Bank predicts that it will grow 7.1% a year over the next three years. And as industries such as manufacturing and hospitality continue to develop, more businesses will need accountancy and tax services. This is where finance professionals such as Dr Tin Latt FCCA, managing director at MAT Audit & Professional Services, come in.

‘I strongly believe that accountants contribute their initiative and intellectual abilities to building and sustaining the economy of any nation,’ Latt says. ‘Accountants play key roles in maintaining the transparency and accountability of any enterprise, which is crucial to gaining the trust and confidence of stakeholders.

As well as providing corporate advisory, tax and consulting services, Latt runs a training college (Management & Accountancy Training), which he founded in 1995. He has taught and mentored hundreds of students and, since 2003, he has worked as a visiting lecturer at the Myanmar Accountancy Council (the country’s conferring body for accountancy practice and licences). He also writes on finance, economics, law and accountancy for local trade journals and magazines.

‘I would say that initially I was not interested in choosing accountancy as a career,’ he admits. ‘But my environment convinced me. I graduated from the Yangon Institute of Economics with a commerce specialisation. Then I attended certified public accountant programmes for two years and became an apprentice, training under the supervision of the Myanmar Accountancy Council.’

Latt has seen the services offered by firms in Myanmar’s accountancy sector become increasingly diverse as the economy develops.

‘Today, accountancy firms in Myanmar provide a wide range of services to their clients, which include not only traditional accounting and audit, but also other value-added services such as risk-based auditing and transaction activities,’ he says. ‘Local firms working in collaboration with international firms may have more experience and greater capability in providing these kinds of services.’

For Latt, the education and training of the next generation of finance professionals is a vital issue.

‘Professionally qualified accountants have different skill sets and experience in the field of finance, accounting, business, management, governance, law and economics, which are in high demand in the process of driving businesses,’ he says. ‘It is important to build capacity in fledgling accountants so that they have the opportunity to extend their career in local conglomerate businesses and international companies.’

For this reason, Latt is also involved with the Myanmar Institute of Certified Public Accountants (MICPA), of which he is currently vice chairman. ‘MICPA is playing a big role in developing the accountancy profession in Myanmar by supporting its members in collaboration with local and international stakeholders,’ he explains.

The institute collaborates with public affairs offices in countries such as Australia, and works with international organisations on professional development programmes. It also works on drafting laws and regulations, and helps advise government departments on taxation, auditing, accounting, and other financial and economic issues.

ACCA plays a crucial role in Myanmar, says Latt, who decided to study for the ACCA Qualification because he believed it would help him develop into the internationally qualified professional accountant he now is. After qualifying, he went on to help other students gain the ACCA Qualification.

‘I delivered ACCA programmes in my ACCA training schools from 1998 to 2012, and I taught more than 3,000 ACCA students in various subjects, such as advanced financial reporting, audit and assurance, financial management, performance management and business analysis,’ he explains, adding that following the signing of a memorandum of understanding between MICPA and ACCA (see box), he will continue to collaborate with ACCA in the delivery of professional development programmes in Myanmar.

Latt is currently audit committee chairman of AYA Bank and an executive council member of the Union of Myanmar Federation of Chambers of Commerce and Industry.

From 2011 to 2015, he was also a member of the parliamentary commission for legal affairs and special issues in Myanmar.

Myanmar’s objective is to become a market-based economy with a healthy investment climate that encourages private investment, both domestic and cross-border. A stronger accountancy profession and more qualified accountants will directly benefit this goal.

ACCA and the Myanmar Institute of Certified Public Accountants (MICPA) have initiated a project to develop the accountancy profession in the South-East Asian country. The work is funded by IFAC and the UK government through its Department for International Development (DfID).

The programme aims to lay down the foundations for a stronger and sustainable accountancy profession in Myanmar. ACCA will support MICPA in developing a five-year strategic plan that will build on the national institute’s achievements to date and identify the steps required to take MICPA to the next stage in its journey to IFAC membership. This work will be undertaken in close collaboration with the Myanmar Accountancy Council (MAC) and the country’s Office of the Auditor General (OAG).

A clear programme for delivering the new strategy will be developed, along with a sustainability plan – retaining the focus on MICPA’s long-term success and central role in supporting the development of the accountancy profession in the country. To ensure that the right people are in place to deliver the strategy, ACCA will also work with MICPA on its organisational design and a review of its governance structure. A project coordinator is being recruited to support this important work on the ground and to help coordinate the multiple stakeholder groups that will be feeding into it.