As controller at Qatar Shell, Lorraine Holleway FCCA relishes working in a continuously changing environment where career development is key 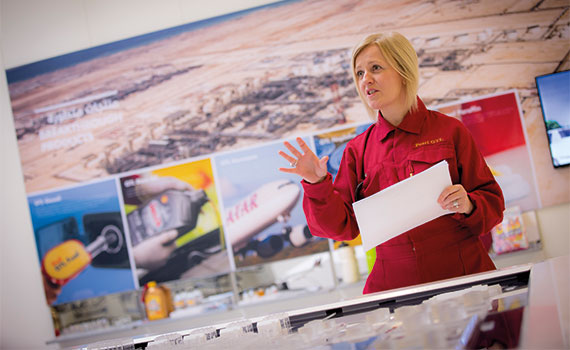 In 2016, ACCA’s report Professional accountants – the future: Drivers of change and future skills looked at the global drivers of change that would have the biggest impact on accountants and the profession by the year 2025. It concluded that ‘the age of accountants as bean counters is well and truly over’. Technical, ethical and digital expertise would always be a core requirement but this was being supplemented by a new range of requirements: creativity, emotional intelligence and vision.

‘The future professional accountant will need to be able to steer a business on a steady course between risk and opportunity,’ said the report. ‘This requires collaboration, strategic thinking and a genuine 360-degree understanding of the business – its environment, its people and its opportunities.’

Speaking to Lorraine Holleway FCCA, controller at Qatar Shell, it feels as though the future is already here, so closely do her capabilities reflect the report’s message.

While her role covers oversight of the core finance processes such as internal and external financial reporting, it goes much broader. Risk identification, mitigation and assurance of those risks, both financial and business-related, are a key part of her remit.

‘The role of finance is continually changing,’ she says. ‘Traditional core finance processes such as month-end close are still relevant; however, these processes are changing and, as finance professionals, we need to continue to develop our skills to optimise these processes through use of new technologies.’ This speaks to the digital element of the seven key quotients identified by ACCA’s research.

‘Today, finance professionals need to understand a battery of issues: the technical accounting and taxation, plus the business model, the risks, how value is created or eroded, the country lens on the statutory and regulatory requirements, and finance and business technology changes. These all need to be carried out within the parameters of a robust control framework,’ Holleway adds. ‘On the behaviours, we need to demonstrate leadership: partnering with our business while also providing the right challenges when needed.’

In Qatar, and in the oil and gas industry, that is a constantly moving objective. The development of Qatar to the richest economy in the world on a per capita basis has been rapid. Oil fields were discovered in the 1940s but production did not begin in earnest until the 1970s. It was the discovery of plentiful natural gas fields off Qatar’s coastline, and, critically, the development of production technology that made those reserves accessible, that really fired the nation’s economy.

Developed in partnership with Qatar Petroleum, the Pearl Gas-to-Liquids (GTL) plant, which is operated by Shell, is the world’s biggest GTL plant and one of the largest, most complex and challenging energy projects ever commissioned. The plant converts natural gas taken from the Qatar offshore fields into liquid petroleum products. The facility came on stream in 2011 and opened up significant new markets for diversified gas products. Its products burn cleaner than oil-derived equivalents and the plant makes enough diesel to fill more than 160,000 cars a day, and enough synthetic oil each year to make lubricants for more than 225 million cars. It will process three billion barrels of oil equivalent during its lifetime.

A further significant investment for Shell is Qatargas 4, a liquified natural gas project that includes offshore production platforms and pipelines and onshore gas processing, treatment and liquefaction facilities, as well as a fleet of liquefied natural gas (LNG) carrier ships. The project, which is 70% owned by Qatar Petroleum and 30% by Shell, began production in January 2011 and shipped its first cargo to India the following month. Holleway’s remit includes the role of finance shareholder representative for Shell’s interest in Qatargas 4. The venture is operated by Qatargas which is the world’s largest LNG producer.

Holleway has come a long way – literally – since qualifying as an ACCA in Glasgow. She chose the ACCA Qualification because she felt it would allow her to keep her future options as wide open as possible: ‘I was working while training and wasn’t sure which area of finance I wanted to work in, but when I was looking at roles in finance, most of them were looking for the ACCA Qualification. I liked that it gave me a wide spectrum to work from.’

She adds that without the qualification she would not have been able to get to where she is now. ‘It’s really helped me. Simply put, I don’t think I would have this job if I wasn’t ACCA qualified; if you want to work in finance in Shell, professional accreditation is a prerequisite.’

After a spell working for a small manufacturing company in Glasgow, she joined Shell in 1998 as part of a joint venture with EY to create a shared-services operation. ‘This was at a time when shared services were a very new idea, very different.’ She stayed there for seven years, qualifying in 2001 and later studying for an MBA at the University of Strathclyde. Then, after a spell in London working in group reporting, she moved to Shell International in The Hague.

The possibility of moving to Qatar came up in 2012
and she did not hesitate. ‘The job – head of financial reporting – was perfect for me and Qatar is a great place to live and work.’

One of the four pillars of the Qatar National Vision 2030 is human development, which includes building a capable and motivated workforce. Developing people is a passion for Holleway. In Qatar Shell she leads capability building for the finance function and actively promotes professional accreditation. Many of her finance team have either completed or are pursuing professional accreditation, which Holleway sees as a fundamental for finance professionals.

Shell has a comprehensive Qatarisation programme, recruiting and training Qataris in a range of fields, including finance. Its programme includes on-the-job coaching, mentoring, short-term international assignments, online training and traditional coursework. It is a subject close to Holleway’s heart, as she has always seen career development as the basis for the success of the individual and the business as a whole.

Professional accountants should take responsibility for their own career development, seeking out a broad range of experiences both inside and outside their company, she believes. She has certainly put this into practice in her own career. An ACCA Council member since 2013, she now chairs the ACCA Global Forum for Corporate Reporting and is vice chair of ACCA’s resource oversight committee, having previously been a member of the ACCA audit and market oversight committees. Locally, Holleway also participates in ACCA’s Qatar members’ advisory committee.

A strong advocate for diversity in finance, in 2014 she was presented with the first ‘stairway to success’ award by the Qatar Shell Women’s Association Network – a voluntary network of Qatar Shell employees who promote diversity and inclusion within the organisation – for her ‘constant support and role-modelling of career success for women’. As for working in a male-dominated sector, she says that her gender has never been an issue. ‘Shell is a very diverse and inclusive organisation,’ she says.

The inevitable quibbles about the heat in the summer aside, Holleway rates Qatar an exciting place to be. ‘I love the fact that everything is changing, in terms of the job and the business,’ she says. ‘It’s an incredibly interesting business and market to be in.’

"Traditional core finance processes are still relevant; however,we need to optimise these processes through use of new technologies"

‘Own your career development. Know where you want to go and make a clear plan for how to get there.’

‘The role of finance is changing. You need to understand the value in a business, how to create it and sustain it.’

‘Be a partner to the business but also get the balance right between being a partner and challenging when challenge is needed.’