Direct stakeholder claims are made by those with their own ‘voice’. These claims are usually unambiguous and are often made directly between the stakeholder and the organisation. Stakeholders making direct claims will typically include trade unions, shareholders, employees, customers, suppliers and, in some instances, local communities. 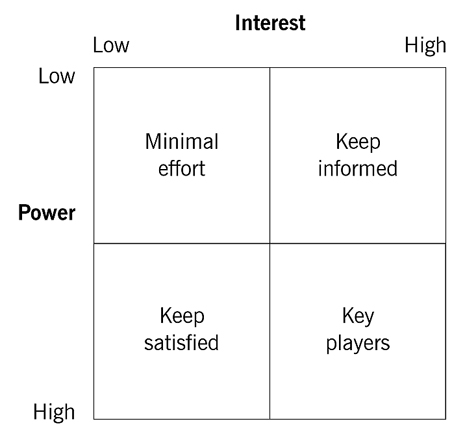 There are a number of different ways of distinguishing one type of stakeholder in an organisation from another:

2. Narrow and wide stakeholders (Evans and Freeman)
Narrow stakeholders are those that are the most affected by the organisation’s policies and will usually include shareholders, management, employees, suppliers, and customers who are dependent upon the organisation’s output. Wider stakeholders are those less affected and may typically include government, less-dependent customers, the wider community (as opposed to the local community) and other peripheral groups. The Evans and Freeman model may lead some to conclude that an organisation has a higher degree of responsibility and accountability to its narrower stakeholders.

6. Legitimate and illegitimate stakeholders
This is one of the more difficult categorisations to make, as a stakeholder’s legitimacy depends on your viewpoint (one person’s ‘terrorist’, for example, is another’s ‘freedom fighter’). While those with an active economic relationship with an organisation will almost always be considered legitimate, others that make claims without such a link, or that have no mandate to make a claim, will be considered illegitimate by some. This means that there is no possible case for taking their views into account when making decisions.

8. Known about and unknown stakeholders
Finally, some stakeholders are known about by the organisation in question and others are not. This means, of course, that it is very difficult to recognise whether the claims of unknown stakeholders (eg nameless sea creatures, undiscovered species, communities in close proximity to overseas suppliers, etc) are considered legitimate or not. Some say that it is a moral duty for organisations to seek out all possible stakeholders before a decision is taken and this can sometimes result in the adoption of minimum impact policies.