New technology is enabling the 'unbanked' to benefit from financial services

With only a third of SMEs in South-East Asia using formal banking services, new technologies such as biometrics and blockchain could improve levels of engagement 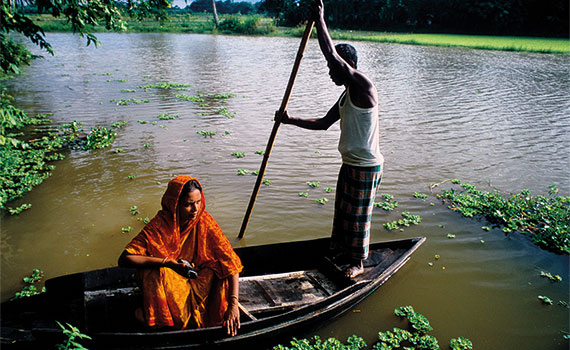 In recent years, financial inclusion has emerged as a critical development challenge to promote growth and overcome poverty. The concept is not new. Back in the 1970s and 1980s, the microfinance revolution, pioneered by the economist Muhammad Yunus with his Grameen Bank in Bangladesh, was trying to help those not being reached by the formal financial system.

The Grameen system turned traditional banking on its head, offering micro-loans to impoverished borrowers who typically lacked collateral, steady employment or a verifiable credit history, with the entire system based on trust and solidarity among members who are mostly women.

Today, microfinancing is going digital, with new technologies such as biometrics, blockchain and cloud systems offering opportunities to accelerate financial inclusion to the 1.7 billion adults who, according to World Bank data, remain outside of the formal banking and financial system.

‘The ability to earn and the ability to spend are not the only needs of the poor; there are broader frameworks of needs. The ability to save whatever excess you may have for the future, the ability to invest, to protect your current situation as well as the future. People have multiple needs whatever their earning level,’ says Varun Mittal, global emerging markets fintech lead at EY, where he covers emerging technology and business models in financial services.

But, Mittal notes, the journey to financial inclusion is not about opening a current account, nor is it about having a debit card: ‘It is about addressing the needs of a person to live a better life, using financial services as an instrument to uplift their life.’

According to the 2017 Global Findex survey by the World Bank, the most commonly cited barriers to having an account with a financial institution are not feeling the need for one because of the lack of sufficient funds, distance to the institution and the documentation required to open an account. As a result, the ‘unbanked’ turn to ‘recycling’ money from one informal source to another, often burdened by high fees and facing greater risk. Meanwhile, society overall loses the potential positive economic impacts of having the money coursed through a legitimate system, says Lotte Schou-Zibell, chief of the finance sector group in sustainable development and climate change department at the Asian Development Bank (ADB).

‘A cash economy comes with its own inefficiencies, which makes it more expensive for its constituents,’ says Mohit Mehrotra, strategy consulting co-leader at Deloitte Asia Pacific. ‘You may not need a bank but you do need financial services as it is an important enabler of the economy.’

South-East Asia is historically an underbanked region. According to research firm CB Insights, as of 2018 only 47% of adults in the region had a bank account, while just a third of South-East Asian SMEs had access to loans or lines of credit. But fintech companies are leveraging advances in technologies such as cloud system, blockchain and biometrics to offer new platforms to reach and service these unbanked adults, two-thirds of whom are estimated to have access to a mobile device.

For Schou-Zibell, a number of technologies stand out. ‘Big data such as social media activity or telephone usage can help with credit scoring, while biometrics such as fingerprints and facial recognition can also help in cases where people have no formal ID,’ she says.

She describes ADB’s pilot project with MiBank in Papua New Guinea, where a smartphone is used to create a banking ID by recording fingerprints and other visual recognition information. ‘The customer – once he or she provides information that matches the ID and the same information the bank has on file – can then use this to use banking services,’ she explains.

In India, meanwhile, Yes Bank has started bridging the gap in remote areas by teaming up with fintech company Wirecard to use a biometric digital payment system. Customers can access some essential financial services such as cash withdrawals and bank transfers using their fingerprints as transaction validation.

Cloud-based technologies are also starting to help service the unbanked in hard-to-reach communities in South-East Asia. ‘In remote areas where there is no cellular data access, solutions that work online and offline are necessary’, Schou-Zibell says.

Cloud-based technology is helping Cantilan Bank in the Philippines to extend its reach beyond its brick-and-mortar branches, offering digital financial services to clients throughout the Mindanao region. ‘The mobile phone and digital banking give opportunities that were not there a decade ago,’ says Mittal, noting that mobile technology has brought about a ‘huge democratisation of access’. ‘You don’t actually have to have your own mobile phone. All you need is one phone or a tablet in the village, for all to use. Is it is ideal? No. But is it better than before? Yes. The premise is that access is cheaper and easier.’

Blockchain technology can also help tackle financial inclusion on several fronts. It offers potential for identity verification, a key requirement to opening an account with a financial institution, and can give a more secure form of access to a range of digital financial products, particularly in the field of digital remittance.

‘The key here is really the digitisation of information to create an additional layers of trust by having more data,’ Mittal explains. ‘Data can be stored in multiple ways and blockchain is just another way to store and secure the data.’

However, simply providing access to financial services is not enough to address issues around financial exclusion. According to a report by MagnaCarta Communications, 20% of people with a bank or mobile money account have not used it for more than a year, and many more people only ever use their account on an occasional basis.

‘Often, the debate on financial inclusion focuses on access to financial services and the potential of digital and mobile technologies. But simply providing access to financial services is not enough. To achieve any real impact, people also need to become active users of financial products,’ says Ann Cairns, vice chairman at Mastercard, which sponsored the MagnaCarta report, adding that the battle for inclusion is really about ‘how bona fide players and regulated providers can do a better job of out-competing the informal sector’.

Schou-Zibell acknowledges that banks do need to do better to provide services at the same or cheaper cost than the informal sector, and points out that new technologies can help to do that. ‘Using new technologies brings down costs,’ she says. ‘Regular banks need to be sure they are providing the services that customers need, big or small, such as for small payments or small savings.’