This second article in a five-part series about management theories explores several that deal with corporate performance. They include:

EVA has been covered very thoroughly in five previous articles in Accounting and Business, so I will be brief here:

EVA is useful not only for mergers and acquisitions work and business valuations, but also for performance management year on year; it can be used either alongside or instead of conventional accounting profit. EVA is more strictly scientific than accounting as it is based on economic models but it does demand quite a bit of education to implement.

An implicit assumption of EVA is that all value within a business can be captured in financial terms. I would support much of that assumption as I think - as my own research demonstrated many moons ago - that much more value can be captured financially than is normally thought. However, although most 'intangibles' do have some tangible grounding, that tangibility is harder to assess in some special cases (eg where the possible payoff is high but the probability of that payoff is very low).

The balanced scorecard takes a more eclectic approach than EVA, making use of other and non-financial criteria. The BSC stems from a sense of dissatisfaction with one-dimensional, financially based metrics such as accounting profit or EVA. Robert Kaplan and David Norton, the BSC gurus at Harvard, set out to build a framework of controls to embrace other target areas. Their first article was published in 1992 but by around 2000 had become a little passé.

One obvious metric is customer satisfaction, which is always included in the BSC. Another that is invariably included is operational efficiency.

One odd omission from the original BSC is that of competitive benchmarking - for example, relative market share - which is also a good one for a business to have.

Kaplan and Norton set the fourth area of controls as people - in particular, employee morale. I have mixed views on this. It does give a sense of balance, but once upon a time I did an MSc in organisational development and apparently there is no correlation between happy staff and superior performance - maybe because some stretched organisations where people were more stressed and less happy also had superior performance.

Another concern is that many organisations, indeed perhaps most, in reality seem not to care so much about their people, so while it is terribly nice to include this metric, it may also be less than realistic.

Personally I tend to substitute this rather flaky area with something like 'development', both internal and external. So my BSC would incorporate five elements:

To avoid organisational overload, none of these should be broken down into more than five sub-elements. One of the key reasons that many if not most BSC interventions fail is overcomplexity.

Customer focus is essentially a set of processes intended to promote performance in one of the quadrants of the BSC. This approach was very popular in the 1990s but, in the UK at least, seems to have got forgotten. One might be forgiven sometimes for thinking that many people in the UK don't actually know what the word 'service' means. There is still a huge opportunity here for achieving real competitive edge.

Think about who is actually good at it: Waitrose, certainly, but not many more. Go to the US, on the other hand, and real service is everywhere.

I recently watched the very amusing film The Best Exotic Marigold Hotel. In the film an elderly English lady gives the locals in an Indian call centre some training in how to understand the customer from the customer's perspective (in reality, call centre workers in India are normally very good). The film's depiction of reverse education demonstrated by a customer in order to get the call centre workers to depart from their set script is absolutely hilarious!

The emphasis on customer focus seems to have died away in the UK, partly because management fashion has moved on but also because of a general perception that it is enough simply to run a few workshops on it - 'problem fixed'.

Customer focus is simply not part of the UK's corporate culture - anyone who disagrees should follow me around shopping to see how many yellow or red cards I give for poor service (you can buy the cards from the Referees' Association website).

Implicit in the BSC is the notion that there are multiple stakeholders in a business. The most obvious are the staff and then the shareholders (the land of EVA) besides the board/management. On top of that there are the customers (in the BSC) and then government, media and society. Indeed, this has given rise to the idea that shareholder value should be reframed as stakeholder value.

Stakeholder value can be defined as the value that the organisation adds or destroys for its stakeholders. In this definition, stakeholders are all those individuals and groups who either have an influence on or may be affected by the conduct of the organisation.

So the angle here is that corporates have a wider responsibility than just to those within the organisation and also beyond shareholders. For accountants this colours their world as it affects much of the content in the annual report, and also generates the need to set up committees of the board to address risk management, health and safety, and so on.

Indeed, the whole area of governance has come much more to the fore since the most recent wave of business collapses associated with the credit crunch/major corporate frauds etc. Even companies with such blue-chip reputations as Shell (over-reporting of oil reserves) and BP (the Gulf of Mexico oil spill) have had their reputations tarnished by appearing not to fulfil their corporate responsibility. Governance is mainly a post-2000 phenomenon.

I happen to teach corporate governance at Henley and what is interesting here is that governance seems less of a single theory and more a number of theories or perspectives that at some point in time got conveniently stitched together and badged as governance. While governance has got to be a behavioural topic, the theory seems remarkably short on behavioural analysis.

Ultimately a relatively small number of key individuals seem to have got carried away by megalomania and greed, and the checks and balances of structures such as remuneration committees and non-executive directors proved singularly ineffective in preventing corporate disasters - really, human nature should come as no surprise to anyone.

Benchmarking is a process which cuts across the BSC by seeking to identify best practice through understanding how organisations achieve superior performance. For example, one might choose an organisation that is outstanding in its research and development (eg appliance manufacturer Dyson), customer service (eg Metro Bank) or cost management (eg Ryanair, easyJet). By understanding that organisation's processes, competences, mindsets and organisational methods it may be possible to replicate some of that excellence in a similar function in an entirely different industry.

For example, I was flying to a water utility on easyJet and used that experience to apply a cost leadership model for the water utility using the easyJet approach, with possible cost savings of £10m. Benchmarking can be really helpful in order to get a quite different perspective on performance than just score keeping will give.

Perhaps the newest kid on the performance management block is risk management. This can be defined as the proactive identification, qualification and prioritisation of risks, and planning how to deal with them.

Ever since the credit crunch, risk management functions have blossomed, leading to many accountants getting more deeply involved in risk management either as part of their job or all of it.

There are different approaches to risk management but all typically involve some prioritisation. It is very common to plot risks in terms of the following two variables: risk (in probabilistic terms) and impact.

Personally I find that most managers struggle with probability assessments and so I would use a scale from 'low' to 'high' to categorise probability. Also, I would also use the term 'importance' rather than 'impact' - as the latter feels more vague to me.

Performance driver analysis is my own contribution to the theory and nicely integrates the lot. A simplified example is shown in the MG Rover 2000 to 2005 diagram below. It ranks the factors facilitating performance and those constraining it for Rover Group before the company went bust. Both external and internal forces should be incorporated. 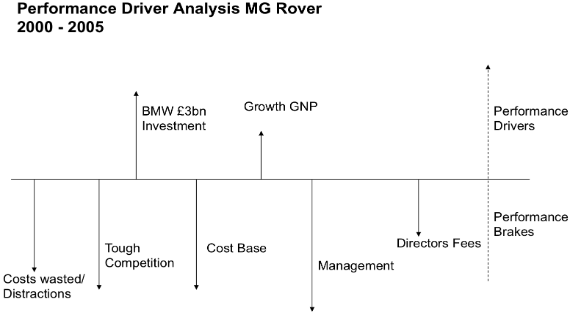 What this brings to the accountant is some way of communicating economics without using numbers. It is also diagnostic. Why not try it in your next management accounts?