Even the most upright leaders can lose their bearing on their moral compass. Alison Young discusses the warning signs and some possible interventions 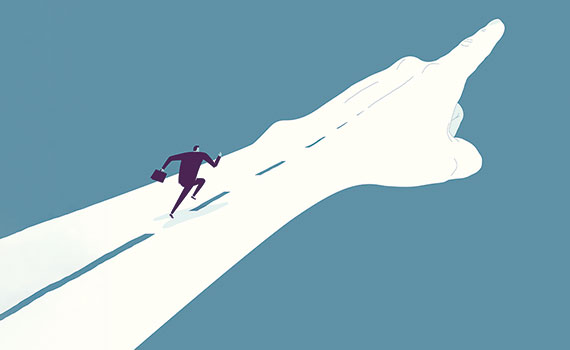 Does any leader start their career with the intention of being corrupt?

We certainly don’t like to think so, and evidence suggests that the first step towards large-scale deception is not a big leap off the moral path, but more of a wobble and accidental slip: the slightly nuanced numbers, the ‘small’ favour for a client, the gaze turned away from inappropriate behaviour. It’s what happens next that determines the leader’s moral trajectory. How can leaders find their way back and then stay on track, resisting the psychological, practical and financial pulls towards different agendas?

In that first misstep lurks danger: human beings are wired to overcome dissonance between action and beliefs, and in order to explain any discomfort that the leader feels with that first small transgression, they justify it as necessary for the good of the team, to keep their job or some other higher purpose. As they continue to post-rationalise the wrong deed, fissures appear in their moral framework, clouding the way back onto the right path.

Like the rotten apple in the barrel, how can the leader’s misdemeanours go on to pollute their team? At first, team members may play along as they mull over their personal reactions to what’s going on and assess the psychological safety of speaking up. If no one does, the team may begin to become numb to what they are seeing, and then begin not to notice at all. The rot has truly set in.

So what can stop any deviation from the moral path, both at the first wobble and as the pace of the journey quickens? What kind of systems, processes or behaviours stop or discourage the leader from being pulled in the wrong direction?

Counterintuitively, one solution is to increase the number of ‘pulls’ on the individual leader by introducing a wider range of views and voices from within and outside the organisation. Having more rather than fewer points of view gives the leader greater perspective on their challenges and minimises the risk of starting or explaining away any tempting misdemeanours.

Like a set of Russian dolls, each contained within the next, the leader and their team sit within the wider organisation, which in turn sits within the broader governance structure, and within that, wider society. The more perspectives leaders can bring in from those different layers of their world, the more they build the collective agenda, and not just their personal version of it.

A useful rule of thumb is to have a minimum of three points of attention – one from each layer – at any one time; and there are a variety of ways to build that into day-to-day business.

Bringing these stakeholder voices into meetings and decisions through reports, customer surveys and site visits is useful. But nothing beats having those voices physically present in the room. Employee representation on boards may be the gold standard for channelling the employee voice, a practice most enshrined in Europe and, in particular, in Germany. But the jury is still out on whether employee representation per se puts any brake on malpractice. As with most issues of diversity, it is not the numbers themselves that make the difference, but the inclusive nature of the team or organisational culture, and the quality of dialogue and decision-making. Truly debating and considering a rich source of different viewpoints leads to more robust decisions.

Forums for diverse thinking can be created right across the organisation of course, including cross-functional teams that break down silos and challenge any creeping group-think that might be a threat to ethical behaviour. Any system that has broad membership – including the organisation itself – is essentially self-balancing. Through this process of course-correction, leaders and their teams are able to stay true to their individual and organisational values.

How do cross-functional teams or diverse boards and management teams create the dialogue to make use of multiple views? What needs to happen so that individual team members don’t get tempted to play along with the prevailing narrative, but instead speak up, challenge and be truly heard?

Unsurprisingly, being approachable as a leader is more likely to encourage others to challenge, but the rub is that almost no senior executive believes they are scary to talk to – which is often at odds with what others think. Leaders can help their approachability quotient by talking openly about malpractice and by giving their own examples of when they spoke up.

More often than not, leaders suffer from ‘superiority illusion’: the more senior the leader, the higher their opinion of their listening skills and the easier they think it is for everyone else to speak up. Challenging people who appear to benefit from the status quo (who are often blind to their advantage) is not easy to do. So informal channels of communication outside formal meetings are particularly helpful for individuals from minority groups, who are more likely to fear the negative consequences of speaking out.

A leader’s moral compass therefore needs to have many points on the dial, so that a variety of views can inform quality decision-making. But at the end of the day, the most powerful force to keep the leader on their moral path is right under their nose: the relationship they have with their boss is fundamental in shaping the rules of the game, including the ability to speak up and indeed ‘listen up’ to others more widely in the organisation.

Alison Young is a director of Leaders in Change.