Get ready for the accounting bots

As routine tax compliance becomes increasingly automated, practitioners stand to benefit from new opportunities - provided that they are willing to adapt 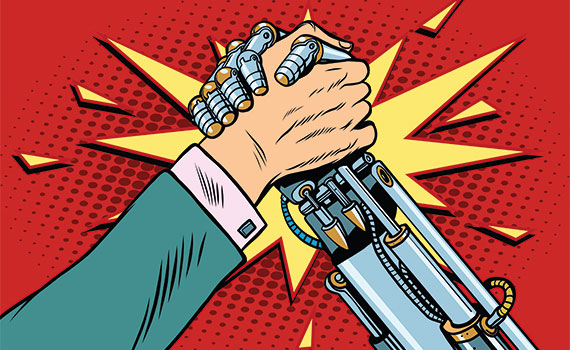 Automation is threatening a whole host of jobs with obsolescence, with accountants supposedly at the top of the endangered species list. If news headlines are to be believed, over 95% of accountants and taxation experts may be replaced by robots within the next two decades.

Alarmist headlines aside, it is inevitable that some functions will soon be done by machines. A 2017 report from McKinsey Institute says that 43% of data-collecting and processing work in the wider financial services sector can be fully automated.

This is already happening in tax compliance, where robotic process automation (RPA) is increasingly being deployed through computer-coded software that mimics and replaces human actions performing repetitive, rule-based tasks across various applications and platforms. An RPA ‘bot’ operates just like a human would: it logs into a system, extracts information from various applications, manipulates and reconciles structured data, performs calculations, fills in forms, communicates with other systems and logs out.

Since bots drive existing applications with a low cost of integration, RPA has a high potential return on investment and a short payback period. ‘Because it’s relatively easy to implement, in many cases RPA is an intermediate step to prepare for further automation,’ says Wobke Hählen, robotics process automation tax lead within Deloitte the Netherlands.

EY US was among the early adopters when it began introducing RPA in its tax practice two years ago. ‘RPA has allowed us to take the robot out of the person, while also gaining the efficiency of more than a hundred bots working 24/7, never tiring of the tedious steps and, once programmed for data entry, filing and the like, improving the quality of the outcome,’ says Sharda Cherwoo, EY Americas tax intelligent automation and robotics process automation leader.

Cherwoo adds: ‘We are no longer working “on” machines; we are working “with” them and integrating them into our workflows to provide our clients with exceptional service. What we have embarked on is no different from what is happening in healthcare and robotics surgeries with enhanced outcomes for patients.’

PwC US is also pioneering the technology for direct and indirect tax compliance. In its report Robotic Process Automation (RPA) – What Tax needs to know now, PwC demonstrates how RPA was used to streamline the income tax provision calculation and reporting process for a client, a global consumer healthcare company with more than 100 legal entities in multiple US states, countries and foreign municipalities. The client uses various financial systems, trial balances and charts of accounts. Its financial results, including income tax provision, are consolidated and reported by its US team on a quarterly basis.

The client uses income tax provision and compliance software for the year-end provision and tax return process. Previously it calculated interim provision based on spreadsheets extracted from disparate financial systems, so gathering and reconciling data was a manual and time-consuming process.

PwC used RPA to pull raw information from ERP systems, clean up and reconcile various accounts, organise data by legal entity, analyse account changes and flag significant account differences for follow-up review. The speed of income tax provision calculation was therefore increased, as was accuracy and efficiency in gathering and manipulating data. Manual effort was pruned back by 10% to 25%, and the potential for human error was reduced, too.

Grant Thornton UK is currently reviewing how its entire tax practice operates, encompasses not only RPA, which is being implemented for corporate tax compliance starting in London, but also the use of artificial intelligence (AI), as well as improvements to data sourcing and analytics. Andrew Burman, tax partner at Grant Thornton UK, says: ‘The changes will not only standardise our client service approach and make us more efficient but should also reduce the number of client information requests as we aim to collect all the data we need, first time. It will also be easier to identify potential issues and points for discussion when client data is initially submitted.

‘The effective use of technology will also make the sharing of best practice across the firm much easier, creating a more integrated tax team with a much broader business advisory offering.’

Mark Schofield, PwC Global and UK tax reporting and strategy leader, says that the reduced risk of errors and faster turnaround that RPA brings should lead to higher quality, more efficient and more cost-effective compliance services. ‘Clients should also get a more comprehensive range of services as part of their compliance package because RPA frees up time for human staff to add more value and insightful advice,’ he adds.

Hählen, however, points out that tax is currently still operated in a highly manual and non-standardised way. ‘We – and our clients – need to automate where possible. That way, our highly educated people will be able to focus on analysis, scenario planning and risk management, instead of spending a lot of time on recurring data-wrangling activities,’ she says.

Schofield explains that the key to getting the most from RPA and other software robotics is using a combination of human and machine working alongside each other. ‘Machines are good at automating particular tasks, not whole jobs, at least not currently. They’re good at locating knowledge, recognising patterns and continuous learning. They are less good at common sense, morality and emotional intelligence,’ he says.

Cherwoo agrees that it is essential for bots and humans to work together, adding that tax staff should become more consultative, innovative and entrepreneurial. ‘We are allowing the bots to do the “what”, while people focus on the “why”, she says. ‘Our workforce model has therefore been redesigned, enabling compliance professionals to upskill for more purposeful, strategic work. It’s an exciting time for change-adaptable professionals who look forward to learning new skills, such as Lean Six Sigma project management, data analytics and relationship-building skills, so they can fulfil higher-level service responsibilities.’

It is expected that increasing automation will change the role of the tax professional rather than make it obsolete. ‘I don’t currently foresee job losses in tax,’ Hählen says. ‘On the contrary, given the increasing demand from a compliance and regulatory point of view, RPA and other tax technology solutions are needed to relieve pressure on tax departments so that they can do more with less [time].’

While machines will do the heavy lifting on the number-crunching front, tasks requiring ‘judgment’ will still be the domain of human advisers, according to KPMG’s Tax Technology: now and the future report, co-authored by Grant Wardell-Johnson, leader of KPMG’s Australian Tax Centre. The report also notes the growing complexity of the role and the reputational risk involved as tax moves into the domain of corporate social responsibility. ‘Changing values on aggressive tax planning have moved the complexity of tax to another level, where the tax practitioner needs to take into account views of multiple stakeholders and, with increased globalisation, multiple jurisdictions,’ Wardell-Johnson says.

Nevertheless, machine learning or AI is expected to take on more complex tasks involving decision-making. ‘We already see such technology extract unstructured data from contracts and invoices, organise it, apply rules and draw some basic conclusions,’ Lee says. ‘As machines improve their deep and reinforcement learning, they may eventually be able to make more advanced decisions.’

This might actually lead to more jobs. ‘If history tells us anything, there were speculations of job losses when spreadsheets and computers were introduced into the tax compliance process, but instead we saw significant growth of jobs in tax departments,’ Lee continues. ‘It’s certain that how we perform the work and the skillsets will change, but this will create new opportunities.’

"We are no longer working 'on' machines; we are working 'with' them and integrating them into our workflows"

How to make RPA work for you

Now that you know more about robotic process automation (RPA) for tax, what should you do next? The key considerations for practitioners wishing to implement RPA should be around quality control and change management, says Richard Mackender, Deloitte’s South-East Asia tax and technology lead. He explains that there needs to be rigorous quality control to make sure ‘the tools do what they are designed to do. There also needs to be a clear dialogue with staff to make sure they understand what the tool is there for, and what it can and cannot do. Most importantly, the staff will also need to be reassured that only the routine steps are being reduced by RPA but that their jobs are not being replaced.’

When choosing processes for automation, consider ‘the sorts of steps in a task which everyone finds boring and which, as a result, can lead to human error,’ Mackender says. ‘These processes are definitely first on the list.’