How to create a cryptocurrency – and why

Corporates too now want to get into the creation of cryptocurrency and tokens to raise funds for business ventures, but how does it all work? Peter McBurney explains 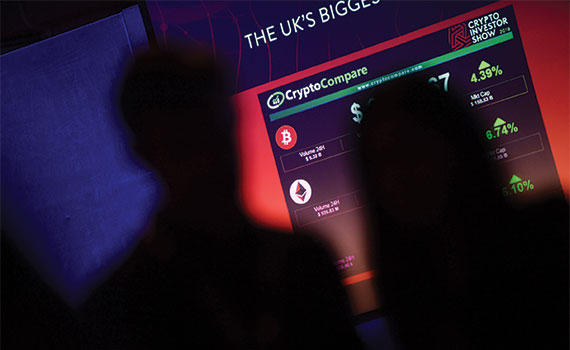 The world, it seems, is awash with cryptocurrencies from companies seeking to capitalise on the phenomenon for fundraising and loyalty schemes. But what exactly is a cryptocurrency, or crypto? How does it differ from a token? And how do you go about issuing one?

Let’s start at the beginning with the first mover, bitcoin, the first truly decentralised electronic currency, or cryptocurrency. A key technical challenge for any crypto is the ‘double-spend problem’ of ensuring that the electronic units of currency are only ever held by one person at any one time. Bitcoin’s solution is blockchain technology, which essentially enables the market to keep track of who has which units of currency at which time. By making all participants in a transaction visible, it gets around the problem that plagues centralised databases of hacking or corruption in the organisation that hosts them. Because every bitcoin transaction uses blockchain, it is witnessed and endorsed by the entire network.

This technology – and bitcoin’s underlying software – is freely available, so anyone can create their own crypto on similar lines. There are now thousands of cryptocurrencies; bitcoin is the best known and at the time of writing has the largest market capitalisation, as measured by the current price multiplied by the number of ‘coins in circulation’.

The second highest market cap is for ether, the crypto used in Ethereum, another distributed ledger platform similar to blockchain. The word ‘token’ is applied to such currencies.

Tokens operate like the loyalty schemes in retailing, such as airlines’ frequent flyer programmes. Because tokens may also have resale value, it is possible to sell them to raise funds for a business venture, even ahead of the venture launch.

Imagine you plan to start a new airline, flying between London and Nairobi, and you want to offer a loyalty programme to your frequent flyers. To raise the funds to start the airline, you sell frequent-flyer tokens before you buy any aircraft, or negotiate landing or take-off permissions, or even create an IT system to manage the tokens.

But why would anyone buy such tokens? One reason would be for business use: if the purchaser had a company with offices in the UK and Kenya, say, and its staff flew regularly between London and Nairobi, then by buying frequent-flyer tokens in advance, it could save on the future cost of tickets. As for non-business reasons to buy tokens, investment and speculation can be powerful incentives – purchasers might believe, for example, that the resale price of tokens after the airline’s launch would be higher than pre-launch.

Many people have invested in token enterprises, called initial coin offerings (ICOs). Over the past four years there has been a boom in ICOs, which raked in US$4bn in 2017 alone. By some estimates, this 2017 total was already exceeded in the first three months of 2018.

Most ICOs require tokens to be purchased using another crypto – typically bitcoin or ether. As these two cryptos rose in value during 2016 and 2017, the valuation of ICOs also rose. Some ICOs have investments worth more now than at the time the ICO closed. The popularity of ICOs has also boosted Ethereum, which is now the most common platform for the launch and management of new tokens.

Of course, there are risks in buying tokens before a business even exists. There may be technological challenges to resolve, organisational or governance issues to settle, and regulatory hurdles to overcome – there may even be outright fraud.

Let us take the regulatory issues first – what is sometimes referred to as the ‘fifth P of marketing’: permission. ICOs are banned in some countries, such as China. Even where they are legal, the legislation and regulation applying to them is unclear and in flux. Where ICOs are a legal means to fundraise for a new venture, a key question is whether they are simply a security (eg, a negotiable financial instrument with some monetary value and partial ownership of a company). In most Western countries the issue of new securities requires considerable effort and cost in preparing investor documentation and complying with regulations. Some ICOs have complied, typically taking six or more months to prepare the necessary documents and spending hundreds of thousands of dollars in fees for legal and regulatory advice, such as in the case of securities filings in the US.

A less stringent approach is not to sell tokens to citizens or residents of countries where ICOs are banned or securities regulations are particularly strict. This approach normally requires the promoter of the token to collect identity information about the potential investors (‘know-your-customer’, or KYC, information) – and sometimes even information about the sources of investors’ funds. It’s an approach unpopular with many in the crypto world, who often prefer anonymous transactions. A third approach to ICO issuance is to ignore all regulations and simply sell the tokens. This runs the risk of later action by regulators or even law suits from regulators and investors with unmet expectations.

As well as regulatory risks, there are technology and governance risks. The textbook example of governance risk is the Tezos ICO, which raised US$232m in July 2017 and was due to launch its tokens by early 2018. After the ICO closed, a disagreement arose between the project’s founders and the directors of an independent Swiss foundation that the founders had appointed to run the project at arm’s length. Although resolved later in 2017, the disagreement delayed the launch of the tokens. Ironically, the Tezos network was intended to simplify the governance and management of cryptocurrencies.

Many central banks and commercial banks have also been exploring cryptos, for internal applications and interbank settlements. Given the ease with which startups have raised funds through ICOs, many large corporations are also now looking at issuing tokens for fundraising. Further rapid growth in this exciting domain seems likely over the coming years.

Peter McBurney is professor of computer science at King’s College London and a member of the academic advisory council of the UK’s Financial Conduct Authority. The views expressed here are his own.

Bitcoin: the first cryptocurrency, launched in 2009 but now more famous (or notorious) for its price volatility

Blockchain: the technology on which cryptocurrencies are based, which enables the market to keep track of who has which units of currency at which time, and whose design and transparency eliminates the need for centralised control

Cryptocurrency or token: an electronic currency, created by entities for different purposes – including fundraising and loyalty schemes, but also student projects and even just personal amusement

Ethereum/ether: the former is a blockchain platform on which the latter cryptocurrency is based

Initial coin offerings (ICOs): the sale of a new cryptocurrency to raise funds for a new or existing business venture

A tale of two ICOs

One example of an ICO is PowerSnookerCoin from UK sports company Power Snooker Group. It decided on an ICO (opened in January 2018 and running until November) as the best way to raise funds to develop venues in UK cities for hosting the version of snooker it has developed; token-holders will have preferential access to venues and Power Snooker tournaments.

Another example of an ICO is BitMinutes, developed by a team from Harvard and Stanford universities in the US, and intended to help ‘bank the unbanked’ in the developing world. BitMinutes will create a cryptocurrency backed by prepaid airtime on phone networks to enable the buying and selling of airtime minutes, and to support peer-to-peer lending and transfers, and micro-loans.