Part B of the syllabus for Paper F1/FAB, Accountant in Business is concerned with the study of business organisation structure, functions and governance. In another article on this topic (see 'Related links'), various organisational models were described, including entrepreneurial, functional and matrix structures. These consider how organisations are structured primarily in terms of relationships.

By contrast, Mintzberg’s model breaks down the organisation into five generic components, considering the role of each in relation to coordinating its activities. These are: 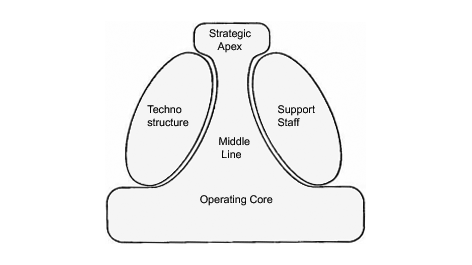 The operating core carries out the activities necessary to deliver outputs.

The technostructure is made up of key individuals and teams working in functions such as human resources, training, finance and planning. Mintzberg states that there are several roles here. Analysers decide on the best ways to perform jobs and seek to standardise skills. Planners decide on outputs and define quality requirements.

Support staff work in functions such as research and development, public relations and legal services. Their outputs do not contribute directly to the core purposes of the organisation, but their activities contribute to the efficiency and effectiveness of the strategic apex, middle line and operating core.

The relative influence of these elements to one another have a significant impact on the nature of the organisation. Mintzberg asserts that each element will have a preferred means of coordination. For example, the strategic apex will attempt to coordinate through direct supervision, and will be especially important in smaller organisations with simpler structures. The middle line seeks to standardise outputs, while the technostructure attempts to standardise work processes. The operating core will try to standardise skills.

Based on his organisational model, Mintzberg described five categories of organisation structure, each of which would rely on one specific element of the model.

The simple structure is centralised and often autocratic, with power emanating from the strategic apex. Typically, control is exerted by the chief executive or small, influential executive team. Perhaps due to its simplicity, the structure can be flexible and sometimes informal, with a strongly defined sense of mission. However, Mintzberg warns that the simple structure is vulnerable, stating ‘one heart attack can wipe out the organisation’s prime coordinating mechanism’.

This structure relies heavily on a robust technostructure. Strategic planners and financial controllers are influential, leading to the creation of multiple layers of management, formal procedures and standardised production processes. Due to the high degree of standardisation, the tasks performed by the operating core can be rigid, offering little discretion for the individual. For this reason, Mintzberg observed that motivation can be difficult and the organisation can be unreceptive to the need for change. The machine bureaucracy is typified by large-scale car manufacturing plants.

In a divisionalised structure, a small central core provides guidelines for business units that enjoy a high degree of autonomy. Mintzberg states that this is an extension of the machine bureaucracy, or may even comprise several machine bureaucracies within a single corporation. It is the middle line that forms a strong coordinating influence, as its key role is to translate the demands of the small central core into the objectives of the operating core. The divisionalised structure is typical of multinational companies.

The adhocracy is task or project-based and has to respond quickly and flexibly to changing demands. These demands may be driven by rapidly changing markets or by innovation. There is little formality, so direct supervision and defined processes are less important than in other organisation structures. Research and development can be a primary driver of adhocracies, as typified by new technology industries.

The evolution of organisation structures

Mintzberg believes that structures are often a product of their time. He states that simple structures and machine bureaucracies were a feature of the past, when developed economies were highly reliant on large-scale production and manufacturing. By contrast, professional bureaucracies and the divisionalised form are more common today. Mintzberg predicts that the adhocracy will become more important in the future.

Written by a member of the Paper F1/FAB examining team