In his second article on IFRS 15, Graham Holt looks at the practical application of the standard using a five-step model 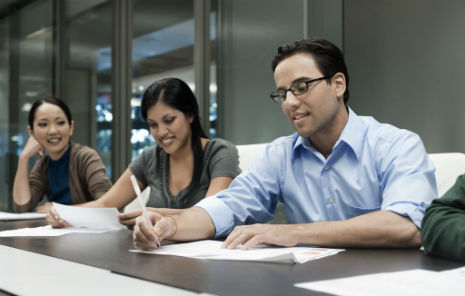 First published in the October 2014 UK edition of Accounting and Business magazine.

The five-step model applies to revenue earned from a contract with a customer with limited exceptions, regardless of the type of revenue transaction or the industry.

Step one: Identification of contract

Step one in the five-step model requires the identification of the contract with the customer. Contracts may be in different forms (written, verbal or implied), but must be enforceable, have commercial substance and be approved by the parties to the contract.

The model applies once the payment terms for the goods or services are identified and it is probable that the entity will collect the consideration. Each party’s rights in relation to the goods or services have to be capable of identification. If a contract with a customer does not meet these criteria, the entity can continually reassess the contract to determine whether it subsequently meets the criteria.

"Contracts... must be enforceable, have commercial substance and be approved by the parties to the contract."

Step two requires the identification of the separate performance obligations in the contract. This is often referred to as ‘unbundling’, and is done at the beginning of a contract. The key factor in identifying a separate performance obligation is the distinctiveness of the good or service, or a bundle of goods or services. A good or service is distinct if the customer can benefit from the good or service on its own or together with other readily available resources and is separately identifiable from other elements of the contract.

IFRS 15 provides indicators rather than criteria to determine when a good or service is distinct within the context of the contract. This allows management to apply judgment to determine the separate performance obligations that best reflect the economic substance of a transaction.

Step three requires the entity to determine the transaction price, which is the amount of consideration that an entity expects to be entitled to in exchange for the promised goods or services. This amount excludes amounts collected on behalf of a third party - for example, government taxes. An entity must determine the amount of consideration to which it expects to be entitled in order to recognise revenue.

The transaction price might include variable or contingent consideration.

Variable consideration is wider than simply contingent consideration as it includes any amount that is variable under a contract, such as performance bonuses or penalties.

"Variable consideration is wider than simply contingent consideration as it includes any amount that is variable under a contract, such as performance bonuses or penalties."

Additionally, an entity should estimate the transaction price, taking into account:

The latter is not required if the time period between the transfer of goods or services and payment is less than one year. In some cases, it will be clear that a significant financing component exists due to the terms of the arrangement.

In other cases, it could be difficult to determine whether a significant financing component exists. This is likely to be the case where there are long-term arrangements with multiple performance obligations such that goods or services are delivered and cash payments received throughout the arrangement. For example, if an advance payment is required for business purposes to obtain a longer-term contract, then the entity may conclude that a significant financing obligation does not exist.

If an entity anticipates that it may ultimately accept an amount lower than that initially promised in the contract due to, for example, past experience of discounts given, then revenue would be estimated at the lower amount with the collectability of that lower amount being assessed. Subsequently, if revenue already recognised is not collectable, impairment losses should be taken to profit or loss.

Step four requires the allocation of the transaction price to the separate performance obligations. The allocation is based on the relative standalone selling prices of the goods or services promised and is made at inception of the contract. It is not adjusted to reflect subsequent changes in the standalone selling prices of those goods or services.

The best evidence of standalone selling price is the observable price of a good or service when the entity sells that good or service separately. If that is not available, an estimate is made by using an approach that maximises the use of observable inputs - for example, expected cost plus an appropriate margin or the assessment of market prices for similar goods or services adjusted for entity-specific costs and margins or in limited circumstances a residual approach. The residual approach is different from the residual method that is used currently by some entities, such as software companies.

This will be a major practical issue as it may require a separate calculation and allocation exercise to be performed for each contract. A mobile telephone contract typically bundles together the handset and network connection. IFRS 15 will require their separation.

"A mobile telephone contract typically bundles together the handset and network connection. IFRS 15 will require their separation."

Step five requires revenue to be recognised as each performance obligation is satisfied. This differs from IAS 18 where, for example, revenue in respect of goods is recognised when the significant risks and rewards of ownership of the goods are transferred to the customer. An entity satisfies a performance obligation by transferring control of a promised good or service to the customer, which could occur over time or at a point in time. The definition of control includes the ability to prevent others from directing the use of and obtaining the benefits from the asset. A performance obligation is satisfied at a point in time unless it meets one of the following criteria, in which case, it is deemed to be satisfied over time:

Revenue is recognised in line with the pattern of transfer. Whether an entity recognises revenue over the period during which it manufactures a product or on delivery to the customer will depend on the specific terms of the contract.

If an entity does not satisfy its performance obligation over time, it satisfies it at a point in time and revenue will be recognised when control is passed at that point in time. Factors that may indicate the passing of control include the present right to payment for the asset or the customer has legal title to the asset or the entity has transferred physical possession of the asset.

As a consequence of the above, the timing of revenue recognition may change for some point-in-time transactions when the new standard is adopted.

In addition to the five-step model, IFRS 15 sets out how to account for the incremental costs of obtaining a contract and the costs directly related to fulfilling a contract and provides guidance to assist entities in applying the model to:

IFRS 15 is a significant change from IAS 18, Revenue, and even though it provides more detailed application guidance, judgment will be required in applying it because the use of estimates is more prevalent.

Graham Holt is director of professional studies at the accounting, finance and economics department at Manchester Metropolitan University Business School.