In the final instalment of her series on high-performing teams, Alison Young looks at how the most successful collaborations are greater than the sum of their parts 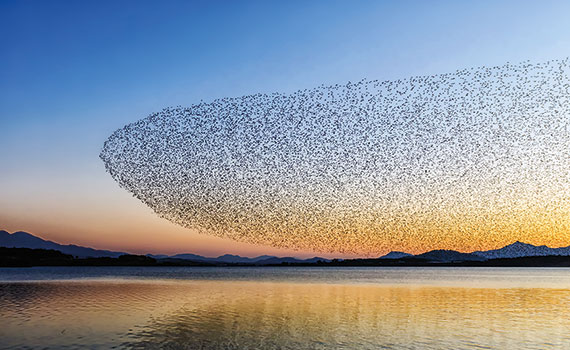 Standing on a platform at a company’s annual conference, the body language and the interaction between the team members said it all: this was a team in name only. Trust and collective spirit seemed to ebb away through the gaps between them, and they lacked any passion to lead a shared mandate. To the audience looking on, this was a team where members delivered their individual responsibilities but showed little desire for co-creation, innovation or new collective thinking.

Shared leadership is starting to attract more attention as a differentiator of team effectiveness. To find inspiring examples, we have only to look to nature: flocks of birds that act as one, or shoals of fish that work together to outmanoeuvre menacing predators.

Studies of migrating geese show that the leader has a clear role but that the role of the ‘followers’ is equally important. The connection between the birds is based on an interdependency that enables them to fly closely together in formation; communication allows any one bird to convey information to the flock that they all act on. The flock has a shared purpose, and each goose knows its own contribution to how that purpose will be achieved.

So how can we create more than the sum of our parts, unlock collective intelligence and create shared leadership? In a work context, the team’s shared purpose is as important as it is in nature. More than just articulating the strategy, business plan or elements of the scorecard, individual team members need to find their own personal purpose within the overall team purpose. This is the golden thread that links together and gives meaning to the efforts of any one individual, their peers and the overall team effort.

It is also the golden thread that keeps the team on track to lead change at the same time as delivering business as usual. The golden thread of purpose pulls the team into the future, keeping members focused on what’s strategically important, and stops them slipping back into the familiarity and distraction of day-to-day problems.

The team purpose needs testing from time to time to make sure that the espoused team goal or strategy is the same as the strategy in action. When what’s on the laminate is not lived – in other words, what is really going on begins to diverge from what the team claims it’s doing – the team climate can quickly become toxic as people fight for power or resources.

A clear and simple purpose around which the team can self-organise helps its members to create shared meaning about what they are doing individually and collectively. When the team uses a shared language or metaphor, it’s often a sign that their collective leadership is working well.

In addition to clear purpose – if we are to continue to apply our lessons from the natural world – we need to address connections and communication. Connections within organisational teams are the spaces between the members. Whether team members like each other or hang out socially together is irrelevant because these are not social connections. The connections are instead based on what team members know they need from each other and the team, and what they can contribute; and individuals hold each other to account as a matter of course.

In teams where connections are working well, the leader does not need to be the point of escalation for most decisions because team members liaise directly with their relevant colleagues. The team leader needs to be willing to let go of the more traditional ‘hub and spoke’ organisational model where he or she is at the centre. Although it can sometimes be uncomfortable for the leader, nurturing a team to connect together more organically and dynamically confers faster decision-making and greater team agility.

The last of the three key elements for shared leadership is communication. In this context, it refers to a dialogue that unlocks creativity and innovation, and takes the team to new levels of co-creation and new ideas beyond what any one individual would have created. Team members take responsibility for holding a space in which difference can be expressed and respected, and in which new thinking can emerge. This requires individuals to stay grounded in what the team is trying to achieve and to resist following their own unique agenda. It also requires team members to let go of preconceived ideas and to work with what is emerging through the discussion itself.

In teams that demonstrate effective dialogue, individuals feel able to challenge an idea that is outside their specialism – they are listened to even if they know much less than others because they are valued for bringing a different perspective. Another characteristic is the ability of the team to balance advocacy and enquiry – having members genuinely challenge another team member’s proposal to explore underlying assumptions that can reduce risk and create new possibilities.

In teams where there is an ease of shared leadership, there is a flow of energy and excitement around the purpose, and rigorous debate in which challenge and support play out in equal measure to create new thinking.

In flocks of geese, different birds take turns to be the leader of the flock. Organisational convention may not encourage formal job swapping, but in teams where different members move into and out of the team leader role during discussions and projects, the team has freedom to explore, challenge and unlock new thinking. That is shared leadership in action.

Alison Young is a director of Leaders in Change. @Leader_Insights.

"The flock has a shared purpose, and each bird knows its own contribution to how that purpose will be achieved"