It's time that GRC professionals, regulators and Internal Audit recognised the importance of auditing culture and behaviour - the "soft stuff".

Reading this article and answering the related questions can count towards your verifiable CPD if you are following the unit route to CPD and the content is relevant to your learning and development needs. One hour of learning equates to one unit of CPD. We suggest you use this as a guide when allocating yourself CPD units.

For the past six years I have been running the IIA UK training on auditing culture, I also helped write the IIA UK guidance on auditing culture. My background is worth explaining: I’m a finance professional, but did a masters’ degree in management (focusing on organisational behavior). I then left finance to work in HR (in leadership development and managing culture change). Then I became a Head of Internal Audit for AstraZeneca for seven years, and since 2010, I have been combining my passion for people and the soft stuff with my love of Internal Audit, doing training and webinars across Europe and further afield.

I am really happy that GRC professionals, regulators and Internal Audit have started to recognise the importance of the soft stuff when it comes to the effective management of risk and maintaining ethical conduct. This was caused – in a large part – by the recognition that many aspects of the financial crisis of 2007-2008 were caused by short-comings in the “bonus culture”, and underestimation of the latent risks building up. In addition, there were mis-selling scandals highlighting poor conduct in sales, which did not put the customer first.

So, what is the soft stuff? Being clear about culture, sub-culture and behaviour

The fundamental idea behind the soft stuff is that, on paper, things may appear to be fine, but in practice reality is not the same. In theory bankers were supposed to sell ethically, but in practice some were selfish and pushed products onto customers that they didn’t really need and couldn’t afford, and in turn created more long-term risk.

At a more basic level, thinking about behaviour/culture for internal audit activities:

And this “soft stuff” applies within and between other departments on a day to day basis in any organisation; some departments work co-operatively together, where we might say their culture is collaborative and healthy, whereas other departments operate in silos. These examples illustrate one of the most famous definitions for culture: “Culture is the way we do things around here.” 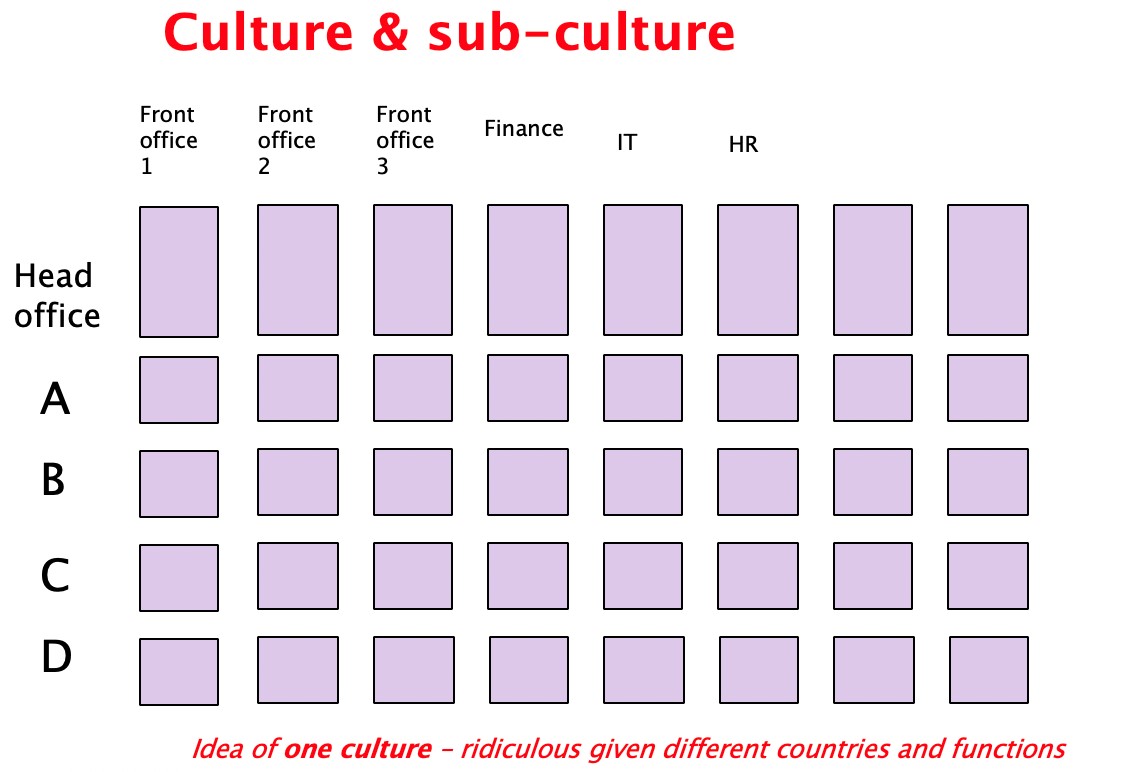 To be more precise, individuals in an organisation behave in particular ways. The aggregate of their behavior creates a “sub-culture” in a specific area or department. For example, there may be a sub-culture specific to selling, and another for the IT department and another for those at the executive level; and one culture in the UK, and another for colleagues working in Japan or India. These differences will arise because the people in each department are recruited from different backgrounds, given different tasks and rewarded and managed in different ways. You can’t expect the cultural norms of the PR department (e.g. creativity) to be the same as the cultural norms of Internal Audit (e.g. focus on facts and data). However, if you can find similarities in the culture between different areas (e.g. “holding others accountable”), then we might say there is an overall culture in the organisation.

Note that cultural norms and expectations may be proposed by senior management and HR, and communicated on the intranet, discussed at workshops and shown on posters, but that is what is called the “espoused” culture. The true culture of an organisation is about the actual way we do things round here. Academics Johnson & Scholes created a model for understanding culture, explaining it encompasses routines and rituals, which may in turn be linked to myths and stories, which may in turn be linked to leadership, heroes and villains etc. It’s important to understand that there are many ways of “slicing” culture, which can include international considerations (see Eric Hofstede), as well as the implicit mindsets people have about organisations (see Gareth Morgan in “Images of Organisation”).

So, this leads to crucial point: behaviour and culture cannot be pinned down by any specific model (no matter what anyone tells you). Furthermore, behaviour and culture are themselves caused by other factors. I can’t stress this point enough: you can’t properly explain poor cross-functional working by saying “there is a silo culture” that’s just a restatement of the problem! You have to start to ask WHY is there a silo culture? And saying, as some do, “the silo culture is due to a poor tone at the top” doesn’t really get hold of what’s going on either, because the question again comes: why is there a poor tone at the top?

Likewise, if a manager is not dealing with the audit process in a constructive way this is NOT explained by saying there is bad culture or poor tone at the top: it’s just a restatement that there is a problem. Such general explanations are actually examples’ of “organisational defense routines” (see Chris Argyris), which effectively talk around an issue, but avoid pinpointing it specifically to protect the organisation from embarrassment. Thus, there is an important interplay between culture and organisational politics, but this is something that many try to avoid discussing.

So, as you dig into this subject, you discover that culture and behaviour result from a range of psychological, sociological and systemic factors. That’s a big statement this far into this article, but it’s vital to see that to get a hold of what you are actually dealing with when we talk about the soft stuff. So, returning to Internal Audit, some of the reasons why departments resist internal audit enquiries and negative conclusions may be because of: 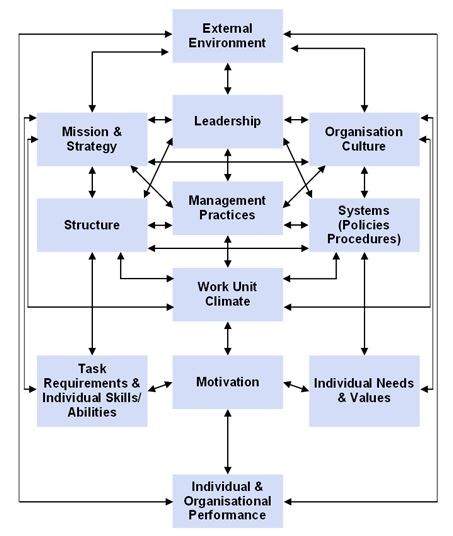 Two final fundamental points when thinking about “the soft stuff” – the soft stuff is NOT intangible, as many say. You are not hallucinating when someone cancels a meeting; nor when they argue over your ratings; this is real behaviour and you experience it. What is more “intangible” is the aggregation of these behaviours. This means it’s always better to deal with the soft stuff at a practical, specific level (behaviour and sub-cultures) than to talk and think too much at the aggregate level (e.g. the overall culture).

Secondly, as you will know, but it bears repeating: behaviour and culture are dynamic phenomena. Things can be moving in a good direction and then there is a change, or perhaps a sudden shock, and the behaviour/culture in an organisation can change completely. This can be due to getting extra pressure to meet sales targets from your boss, or a change of boss, or something external such as Covid-19. In many organisations, perhaps your own, the culture may have changed drastically as a result of Covid-19. This is important to remember, because it means internal auditors need to be wary of thinking, or asserting: “we have a good culture, nothing bad is likely to happen.”

This means if you are asked to provide assurance on soft issues there may be significant issues with the shelf-life of your assurances. The control culture may be good one day, but all you need is a cost-savings programme and job losses and many of those good practices will fly out of the window (unless your organisation makes special efforts to counter this). 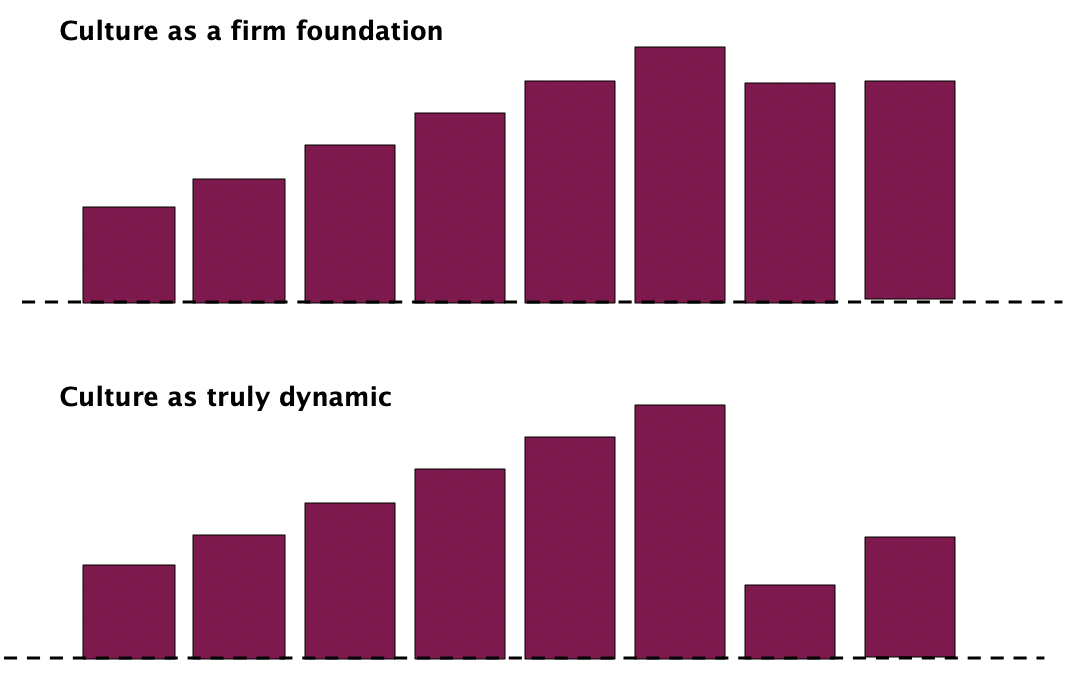 Select image to enlarge (opens in a new tab)

Hopefully, so far so good. The soft stuff is real, it gives us a window into aspects of the way organisations work that explain why things can go wrong (as well as why things go right). There is a lot of “motherhood and apple pie” about culture that you need to take with a pinch of salt, mostly because it brings up complex and sensitive factors that can’t easily be talked about.

IIA standards to the rescue

So, what is a proper role for Internal Audit in relation to the soft stuff? Let’s look at relevant IIA standards (2017 International Professional Practices Framework (IPPF)):

Of course, there are IIA standards around IA proficiency and evidence gathering that must also be followed as well.

So, in practice what do I do about soft issues?

My first piece of advice is that in order to operate effectively in this arena, the first thing you need to do is make sure any audit staff who are going to be involved in this area properly understand what they are talking about in terms of behaviour, sub-culture and culture, the difference between espoused and actual culture, and the fact that there are many models for culture, none of which are definitive.

The next step is to try to “see” the behaviours/culture in your organisation. Of course, official statements about the organisations culture/values are one element of this, but even more so would be the mechanisms to measure and monitor progress towards meeting these expectations.

Specifically, concerning the measurement and improvement of the “official culture”:

Also, take a long hard look at the following: 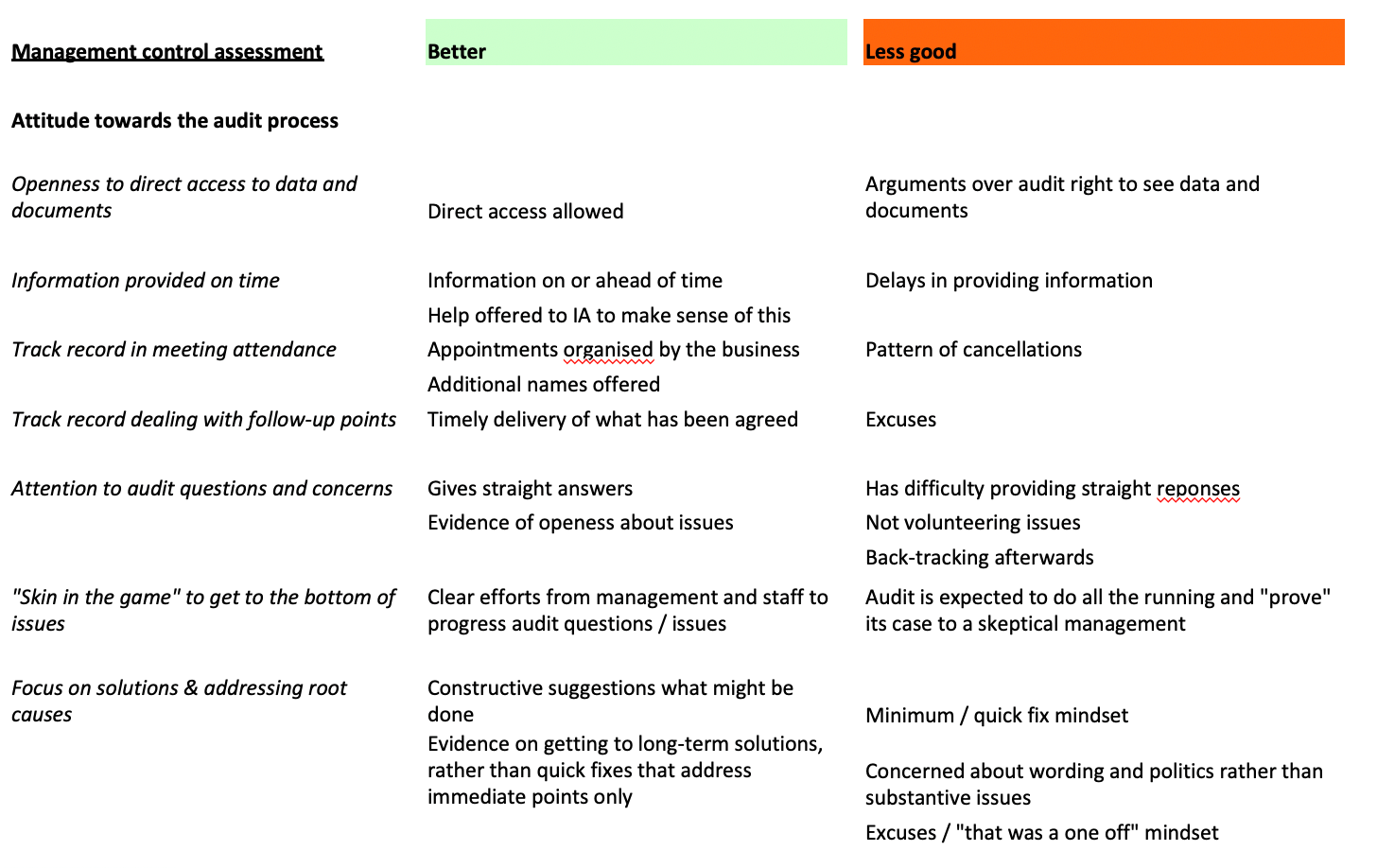 Once you have pulled together as many of the “the pieces of the jigsaw” that you can, the audit team can start to think about:

Examples of practical steps you can take

Based on an analysis of the areas that may pose the biggest risk from a behavioural/cultural perspective, here are some of the steps other audit teams have taken:

At all times, when working with the soft stuff, don’t forget the importance of focusing on something that matters and don’t forget the criteria and consequences (otherwise you’ll get a “so what?” reaction). Most of all, recognise that to be effective in this arena you need to take one step at a time and to recognise that whilst this is the “final frontier” that audit needs to work in, it is also an area with political sensitivities that must be thought about in advance, otherwise you could find yourself “locked out” of this critically important, and extremely interesting, area for Internal Audit to work in.

James runs training (face to face and webinars) for 12 of the IIA organisations in Europe, as well as on an in-house basis globally. He is the author of “Lean auditing, which looks at how lean and agile ways of working can drive progressive ways of auditing, whilst maintaining and even improving added value and quality. See www.RiskAI.co.uk for more articles and information.